Well rested after the previous day’s exertions, the ‘A’ Team made serious preparations for the new day’s walk…..we had another cup of tea.

Before long we spotted Peter walking down the glen, he came over to see what we were up to and have a chat. The Pieman was next to arrive – in a terrible state. All upset he was….he’d broken his spork. If you have you ever tried delving into depths of a rehydrated meal bag with a broken spork to try to get at the best part of the meal (the bit at the bottom) you’ll appreciate how distraught Mike was. After three very full glasses of Schadenfreude I took pity on the poor man and loaned him my very special lightweight teaspoon (liberated from a café somewhere).

Discussions took place to try to decide on the finer points of the day’s route and it wasn’t long before we were agreed: we didn’t have much of a clue. 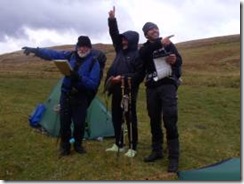 We packed in a leisurely manner and drank more tea. After carefully referring to our Challenge Notes we determined to avoid going past Glenmazeran Lodge by taking the appropriate path.

It didn’t work. Heaven knows how or why, but before long we were marching right past the lodge in a slightly embarrassed manner. Ho hum.

We trundled on, and before long came across Brian and Allan enjoying lunch in a beautifully peaceful and tranquil spot. I regret to say we once again shattered their sublime silence they were enjoying. They must have been highly delighted when we didn’t hang around for too long. They were intending going in our direction – although I imagine they were making mental notes to try for a re-route!

Off we went, leaving the shattered wreckage of Brian and Allan’s oasis of calm. Denis and I were in deep conversation, discussing in great depth……something. Unfortunately this meant we subconsciously decided to continue north-east with a view to, er, doing something. Can’t remember what, but it must have been important.

The young lady member of the Gang of Three uttered some interesting sounding Gaelic words when she realised we had taken an alternative route and we needed to double back to get back on track. Scots Gaelic is a wonderfully expressive language.

In the meantime The Tranquil Pair of Brian and Allan had taken the less adventurous but more correct route. By the time we were eventually going in the right direction The Tranquil Pair were clean out of sight. They probably thought they’d escape our attentions until some time later when we arrived at the Wendy House shooting cabin (plastic spoons a speciality) to find tents pitched outside, the owners being inside the building, busily writing up their logs. In peace and quiet. 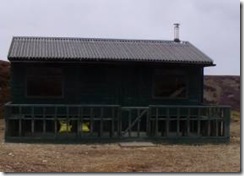 In what was now becoming an unsociable habit, The ‘A’ Team made it’s presence felt by launching through the door with a mixture of laughter, curses and demands for tea. The Tranquil Pair were well established in the hut, and clearly thinking they had avoided our attentions, had set up the woodburning stove for visual effect and a little warmth. 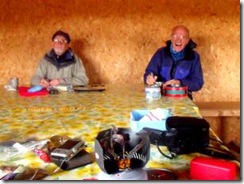 The Tranquil Pair’s peace and quiet. Not.

More laughter and jollity ensued. Tea was brewed, soup was made – it was getting cold outside, and routes discussed again.

We thought it completely unfair and outwith the traditions of the Challenge to impose our presence on these two gentlefolk any longer. So we had another cuppa before heading off into the wild.

The LRT from the hut climbed a short way SSW to the point we thought it prudent to bash heather and stuff in the direction of Red Bothy. The weather was deteriorating, with snow and sleet blasting in from the west. 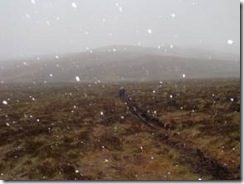 We rather unexpectedly came across a double electric fence that definitely wasn’t there last year. After a long but unsuccessful faff trying to locate a gate or some other way across, the decision was made to disable the fence’s shocking properties. This task completed (the buggers made be grab hold of the fence to prove it was safe!) we still had to cross the damned thing. As Denis and I agreed A Plan we noticed our Navigating Officer-ette on t’other side of the fence. She was getting a bit shirty with her two rather less-agile charges. How on earth had she crossed so easily? More strange Scots Gaelic words were uttered, this time not so quietly. Denis and I thought it prudent to get over the fence sharpish so as not to incur any further wrath. So we did. And we were all happy again.

Splish-sploshing down the banks of the Caochan na Gaibre, Denis soon got into his stride, making light work of the rough river bank. Louise and I were rather slower and with the best will in the world we couldn’t catch Denis. A few hundred metres before the bothy we were able to leave the river bank to finish the walk on a Land Rover Track.

Approaching the bothy we saw a figure heading our way, he marched straight past us, muttering a ‘Hello’ in the way hill walkers do. He then did a sharp about-turn, caught us up and chatted to us as if nothing out of the ordinary had happened.

It was of course Mike Knipe.

Mike had pitched directly outside the bothy, in the gathering gloom we did the same. In the cold and wet it was just so much easier to cook and eat in the bothy so that’s what we did. Peter was already firmly established in the bothy where they had a nice fire going. After eating our fine rehydrated meals it was time for some warming magic medicine, after all it was very cold. Bottles of all sorts of spirits appeared as if by magic. They were passed around the room to share and much fun was had.

I nearly forgot to mention, this was the evening where the tin of peaches was opened and enjoyed by those who like tinned peaches. Me for instance. My pack would be lighter the next day.

What a wonderful evening, we were protected from the elements and warmed nicely by the bothy fire, we enjoyed excellent company and good craic. I don’t think I’ve ever laughed so much for so long - my sides ached! It was an evening to remember. 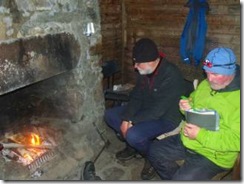 The warm Pieman and Denis, eating his tea.

All to soon it was time to retire to bed. Food bags were hung up out of the way of hungry rodents, the lights switched off, TV unplugged and we went off to our tents.

The weather was horrible outside, sleeting and snowing…..and it was dark. It was difficult to keep the wet slutchy stuff from getting into the tent but I managed. Cold and miserable it may have been outside the tent, I was snug in my little Akto.

Email ThisBlogThis!Share to TwitterShare to FacebookShare to Pinterest
Labels: TGOC2012