A challenge walk in the Clwydian Hills

Eighty odd (some of them very odd) walkers & runners gathered in the tiny Welsh village of Cilcain to take part in the annual ‘Open to Offas’ challenge, a rather lovely yomp around the Clwydian Hills organised by the very fine folk of Merseystride.

With choices of 14, 21 and 30 mile routes there was something for everyone. I chose the 21 miler – having been out rather late the previous evening ;-)

This year the event was run in memory of it’s previous organiser, the very capable Geoff Saunders, who died last year.

At 8.30am,In gloriously bright sunshine, we set off out of the village on tarmac. I was walking in the good company of Meetup members Jo, Fergus and John. Jo had done the 21 mile route and I had done the 14 mile route before but it was a good few years ago. 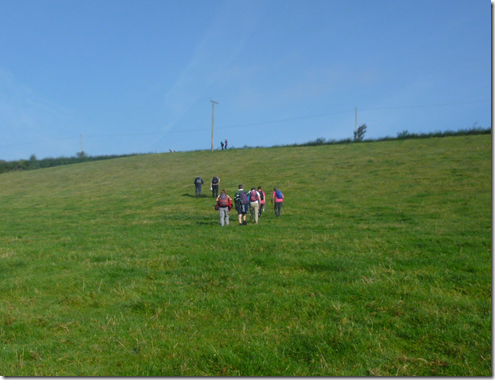 First checkpoint of the day was at North End on the Offa’s Dyke path. Once we’d decimated the checkpoints food reserves and had our tally cards clipped and had a good chat we set off south along the LDP. still chatting.

It was then an uphill mile all the way to the burial mound on the summit of Penycloddiau. The lovely views made the cursing, puffing, panting, sweating perspiring worthwhile. 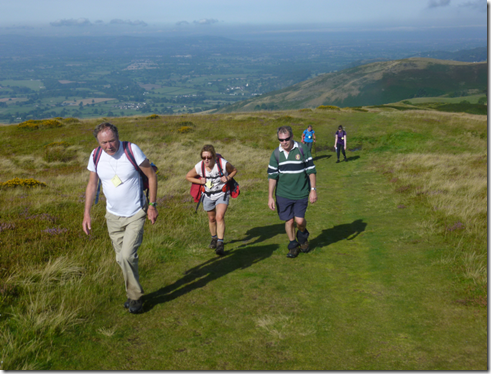 L > R: Fergus, Jo & John. The two ladies, Jane & Vicky, in the background had only relatively recently started walking and were taking part in the challenge in order to raise funds for Claire House Children’s Hospice at Clatterbridge. They did brilliantly :-)

If you want to throw some dosh at Claire house, or if you just want to learn a bit more about what they do click ur. 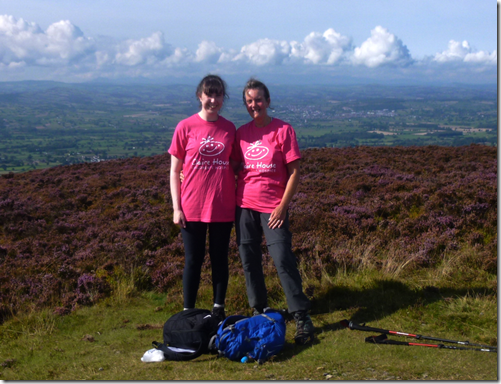 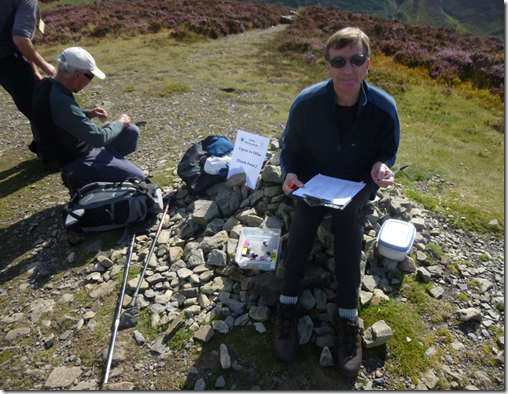 Checkpoint 2, 8.5 miles into the route, was plonked right on the top of Moel Arthur, a 1500’ hill which might be a marilyn, hump, hillock, pillock or whatever. I don’t know, but whatever it was called it was a lovely hill. After a reward of Liquorice Allsorts my compatriots declared a 10 minute lunch break. Normally on a challenge like this food is eaten on the hoof, but we weren’t racing and it was good to enjoy a bit of a break and take in the views.

Our team had expanded to include Jane & Vicky, now we were six. The ladies were walking at our pace and proved to be great company. 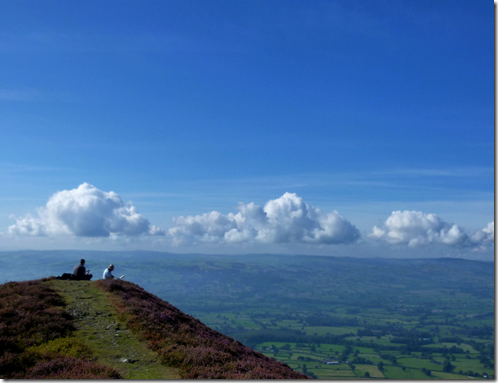 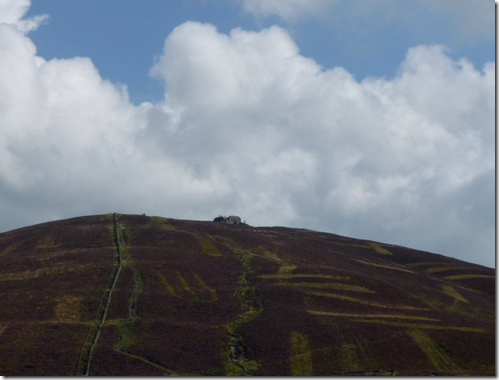 Checkpoint 2 to Checkpoint 3 looked an easy(ish) leg of the route, less than 3.5 miles with a bit of up and down but it was damned hard work. A baby lizard on the path was the ideal excuse reason to stop for 5 minutes. 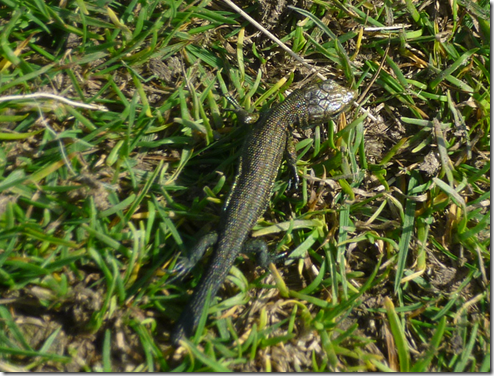 The Jubilee Tower on Moel Famau was clearly a popular tourist spot. Mums, dads, grannies, children, dogs of all shapes and sizes, had climbed to the top and were clearly enjoying the great weather. We were enjoying it too, but the burning sunshine combined the uphillness was conspiring to make some of our team suffer from the heat. 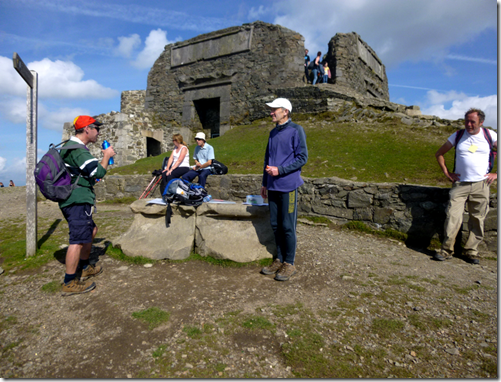 Offa’s Dyke path is really easy to follow, it’s well signposted and really well defined – around this area anyway. Open to Offas participants are given a route description but no map. This really is no big deal, the route description is excellent. That’s not to say that you shouldn’t have a map of course.

The descent to the next checkpoint was a bit of a killer, knees were protesting. It was only 1.5 miles of downhill track but it was very steep in places. John was lagging behind on this leg, one of his knees was protesting quite loudly, so much so that by the time we reached the bottom he’d decided to retire. At least he made it to the main food checkpoint. 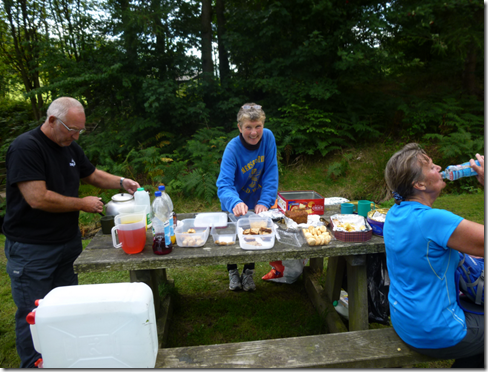 A smiley Chris serving goodies to hungry and thirsty walkers at Checkpoint 4, 13.1 miles. Fundraising Jane slurping from a bottle of what she said was water.

After we’d had our fill of sausage rolls, banana & raisin cake and the most wonderful lemon drizzle cake we continued on our merry way. Whilst John was being driven back to Cilcain our band of five set off to our next rendezvous: a Self Clip (unmanned) checkpoint at 15.4 miles. These self clips are cunningly situated, the idea being that less scrupulous walkers (or runners) might take a short cut. Failure to check into a self clip could mean disqualification from the event.

After the hot sun of the earlier part of the day it was really quite pleasant to be walking through woodland. This is limestone country and the geology was characteristically attractive with lots of cliffs and caves, one of which was quite spectacular: 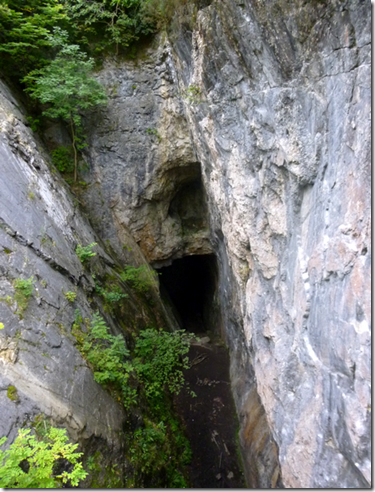 This particular cave was probably used to mine lead in what was once a busy working valley. Nowadays the mining has gone but the gorge is frequently used by climbers doing climbing-type stuff.

A final checkpoint, and one with food :-) was at 17.8 miles, Loggerheads. Tea, cakes, a loo  and somewhere to sit for 5 minutes were on offer, just what the team needed. We were passed by a walker doing the 30 miles route, he was moving fast and purposefully. We on the other hand were bimbling along at a pleasant pace, having a good chat and generally putting the world to rights. All was well with the world.

Apart from a short, steep climb, the rest of the last few miles were on gently undulating paths through woodland. We really picked up speed here – it was probably our rumbling stomachs that pushed us on, we knew there was a meal waiting for us at the event centre. Our tea consisted of pasties & beans, rice pudding, tinned fruit, lots more cakes, and seemingly unlimited amounts of tea. It really hit the spot. 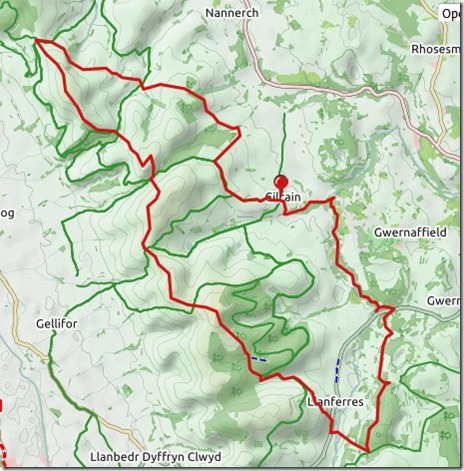 That pointy bit just beyond the half-way is Moel Famau

We had a great day out. I ate too many sweet things. And too many sausage rolls. Jo, Fergus, John and the two charity ladies proved ideal company. We had loads of laughs and we were all happy to wander round at a similar leisurely pace – we formed a fine team.

Thanks must go to my team for being such good sports, and to Merseystride LDWA who worked damned hard to put on such a splendid event. That’s it for another year then.

Email ThisBlogThis!Share to TwitterShare to FacebookShare to Pinterest
Labels: A bit out of order, LDWA, Open to Offas
Older Posts Home
Subscribe to: Posts (Atom)