Another very early start to avoid the heat of the day. I think we were up and away before 6am. Destination for the day was Ourense, around 110km from our ultimate goal: Santiago de Compostela.

The least said about the journey to Ourense the better....although we did stop off at a fine cafe en route, and although we were sat outside, adjacent to a main road, there was very little traffic to disturb us. 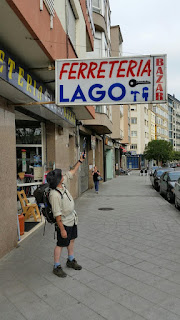 Ferrets are sold widely here - although we didn't spot any. 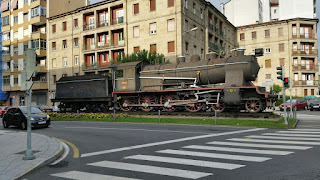 Opposite the railway station


Anyroadup, after the previously quite noisy overnighter we'd decided on a private Albergue in Ourense: Grelo Hostel, not too far from the centre of the city. This proved to be a good choice. It was spotlessly clean, very spacious and modern....but outrageously expensive  (not!) at 15€ ea per night. That included breakfast of toast, croissants,  cake and stuff like  that.

After settling into our new home we set out to explore the town. A most interesting feature of the town was the cathedral with it's octagonal tower. So for 8€ (?) each we spent a goodly time exploring the inside of this magnificent historic building:: https://en.m.wikipedia.org/wiki/Ourense_Cathedral

After the cultural bit it was beer o'clock  - and time to eat too. We spent the next couple of hours in the company of Fred who happened to also be staying at Grelo Hostel. 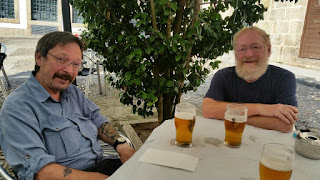 
Fred was from near Newcastle upon Tyne but now lived across the border in SE Scotland. We drank rather a lot of beer together as we discussed all manner of subjects including  politics, rapper, beer, mental health, the NHS, and Brexit - to mention just a few!

The waiter at the bar was a jazz drummer and he was soon drawn into our chat. I ended up playing a few tunes - to the polite applause of our fellow diners and boozers. A most pleasant , if rather extended, lunch.

It was early evening when we left the bar. Music and drumming could be heard from not too far away so we set out to investigate. Like y'do. 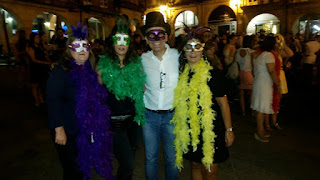 Have a look (and listen) to this short excerpt : https://youtu.be/J5UQhZVaddM

A gathering of musicians and dancers had gathered in the city's main square and they were intent on having a great night out and making a great deal of noise at the same time. They succeeded on both counts.

We followed them as they processed around the town...and the night wore on. And on.

Eventually we decided that enough was enough and it we'd better head back to the Albergue.

We'd got hopelessly, er, misplaced whilst following the procession around town - if it hadn't been for Google Maps we'd probably still be wandering around now.

Eventually we snuck in and got to bed, we had yet another early start the next morning to avoid the heat of the day. 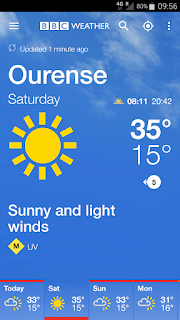 (I can't pronounce it either)

We left the very excellent Vilar do Barrio Xunta Albergue at stupid o'clock in the morning, pre-dawn and in the dark too. Head torches were needed.

Unusually, it was misty and mizzling - but not enough to need waterproofs. 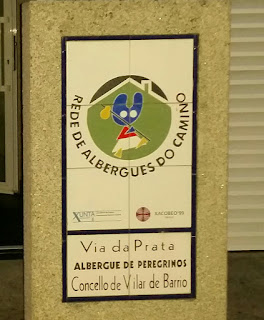 We passed a number of Horereos. These are a bit like sheds on stone pillars. They are designed to store food, grain etc, keeping it safe from the local animals who might fancy an illicit snack.

After a couple of hours the mist disappeared and the sun came out, once again it got quite hot - it reached 30degC by late afternoon. 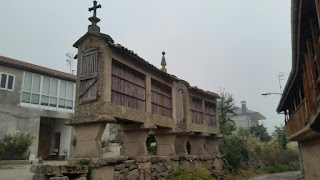 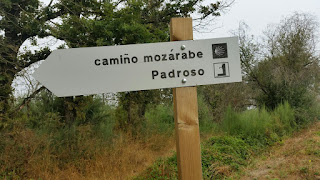 The Plan (Ho-ho!) was to walk to Pedroso, 9 of yer foreign kilometers away, where  'Cafe Bo Camino' would provide brekky. Except it didn't 'cos it was shut.

That's the trouble with plans. 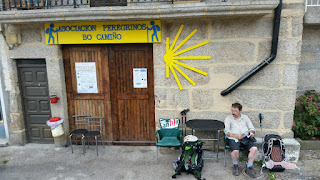 Fortunately had few snacky things on board: Rob's home-made energy bars, some cake, and of course we had plenty of water. We didn't starve.

Continuing, in a slightly less hungry manner, we yomped on to our next overnight stop. This was only a short day of about 15km so it wasn't too much of a problem.

The Albergue was good but very busy and a bit too noisy. We had a good nosh, washed down with a few beers at a nice cafe-bar in town. Once again around 10€ each.


All in all it had been another good day.

The previous day's walk was short, quite easy and really quite pleasant....being as wot it was generally downhill and on good surfaces. The weather was nice too, it may have been a bit too hot. I was glad to be walking in my kilt....lots of ventilation y'see.

We'd started off from the same bar where we finished in April, it was still run by the same grumpy, shouty woman as before.

We spent the night at the very clean, modern and comfortable Xunta Albergue in Laza, it was a night of luxurious peace and quiet - we were the only peregrinos staying there. The cost was 6€ each.

That evening we ate down town and at least one of us (probably) drank too much.

Anyroadup, onto Day 3...or Day 4 if you're being pedantic:

This day wasn't quite so easy, but still pleasant: around 20km with about 1000m of ascent, mostly on good surfaces. And hot. Kilts are good for this sort of thing.

We set out at at around 6am (5am in real money) in order to avoid the heat of the day.  It meant walking with headtorches for a couple of hours but it was quite lovely at that time of day.

Sunrise was just after 8am local time.

At As Eiras, 8km into the walk, the local Amigos del Camino had set up a small help-yourself cafe, we donated a few Euros each and took advantage of the facilities. Nice, this is what happens on the Camino.

Later, we stopped for a bite to eat and a cuppa at Cafe El Rincon del Peregrino in Albergueria.

The cafe owner has adorned the walls and ceilings with shells, each bearing the name of each peregrino who has called in. It was quite a sight.

Our planned stop for the night was at Vilar de Barrio, at another 6€ per night Xunta Albergue. Again this was a modern spotlessly clean affair. Odd that there was no cutlery or crockery in the otherwise excellent kitchen.

Once again we ate in the town, an excellent 3 course meal for 10€ each. There may have been beer involved too. But no wine this time. By order.

It had been a good day and Rob was proving to be a more than worthy walking pal. 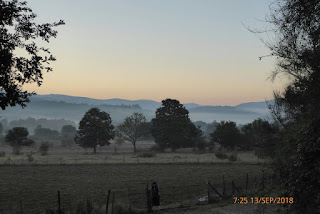 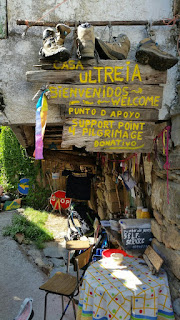 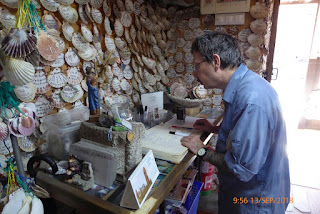 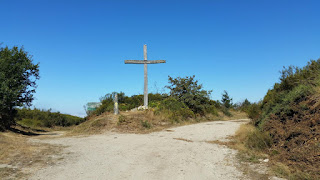 Rob and I walked a short section of the Via de la Plata Camino in April, now it was time to finish the job.

We hopped on a luxury-less Ryanair flight from Manchester to Madrid, and then a luxury train to A Gudina in Galicia.

The train was excellent : at 250kmh you really didn't know you were moving. And it was cheap. Very cheap.

The British train network could learn a lot from Spain.

We spent the night at a 'hostal' (a cheap, but very good hotel) and then took a taxi to where we finished our last leg of El Camino, at Campobecerros. ..in the middle of Spanish nowhere.

Then we walked shortly, downhill, for around 15km to our first night's Albergue accommodation, 6€ a night each.

We know how to splash the cash.... 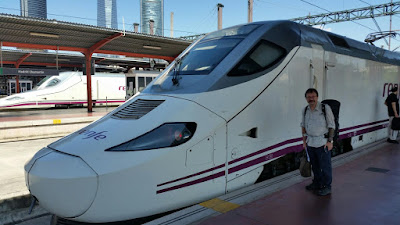 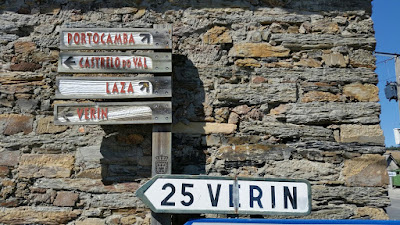 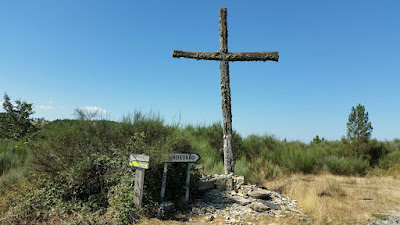 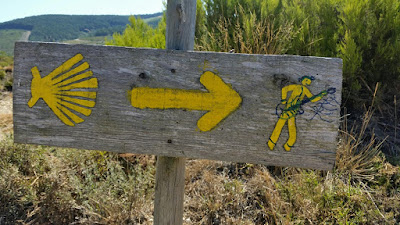 The first trail of the season

The runes (ie the BBC weather forecast) lied. They said we might get the odd shower…not a downpour that started as Mssrs Park, Wells and myself set off from the Forest Hills Hotel, armed only with bags of sawdust.

Forest Hills is popular with the club, the food and facilities are excellent, the staff address you as ‘sir’….but the beer’s not up to much. Oh well.

Anyroadup, undeterred by the increasingly heavy rain and the promise of not-very-good beer, we trotted off in the general direction of the monument behind the hotel, leaving clumps of sawdust in our wake – so that more athletic club members might have half an idea of where they were supposed to run. 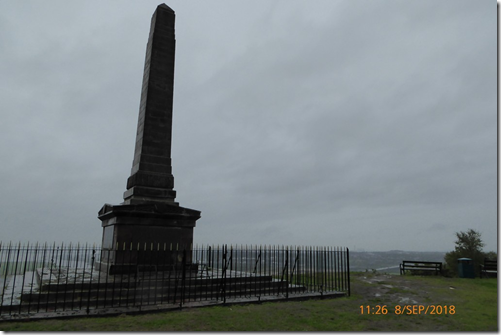 We slipped and slid downhill towards Overton and eventually gained a bit of tarmac…but only a bit. We ‘ran’<koff>  through some soggy woodland that had seemingly be freshly planted with nettles. Fortunately we’d all chosen to wear longs rather than shorts so we didn’t suffer too much.

We headed NW over the A56, to run alongside the railway line to pick up Godscroft Lane, running south, back to the A56.

The first encounter with the A56 had proved too much for Old Markham, he declared ‘lost trail’ and returned to base for a shower and a pint. He probably got the best deal of the day.

Next objective was Helsby Hill, quite familiar ground. Although it’s not a big hill, the climb was a bit of a rude awakening for some members (and one trail-layer!) who hadn’t done much during the summer months. 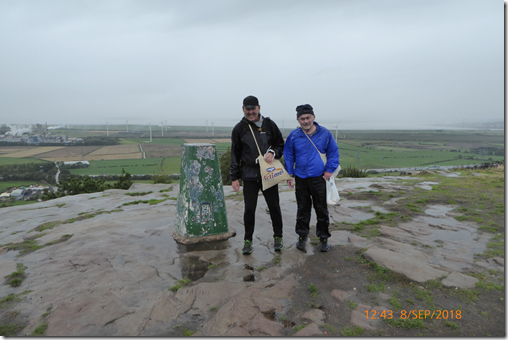 The forced smiles of Wells & Park on Helsby Hill

Prez Park decreed that the weather was brightening up. He was probably right….it just wasn’t brightening up where we were. The rain got even heavier.

We sploshed off the hill in a south-easterly downhill direction where it wasn’t extremely slippy at all, just slippy. And muddy. 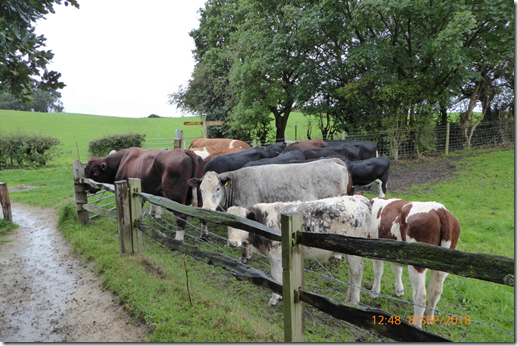 Some not very happy cows

More familiar ground followed as we trotted along the sandstone edges, along the Sandstone Trail. We were still laying our sawdust trail – supplemented by chalked arrows, courtesy of Prez Park. 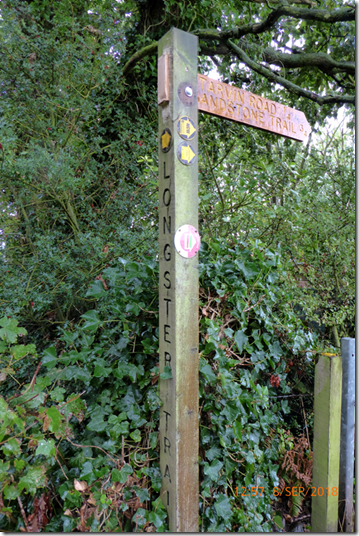 The golf course presented a slight problem. somehow we couldn’t find the path we wanted. HOW long have we been running from Forest Hills??

A slight, er, diversion along the edge of the golf course took us nicely to the path runs across the well-tended green.

It was then just a matter of bit of zigging and zagging back to the civilised surroundings of Forest Hills.

It was a nice route – made better by the addition of a bit of new ground….although I’m not sure if the members of Frodsham Golf Club would agree.

We trail-layers arrive home at 2.20pm, in good time for a hot shower and a coffee – before the packs returned…all looking slightly damp but mostly grinning.

Around 15 sat down to an excellent meal, a couple of runners weren’t able to stay for the meal – it was their loss!

Thanks to Joe for planning the route and being Trail-Layer-in-Command, and Paul for assisting, making jokes, and generally being good company.

Where we went  (anti-clockwise): 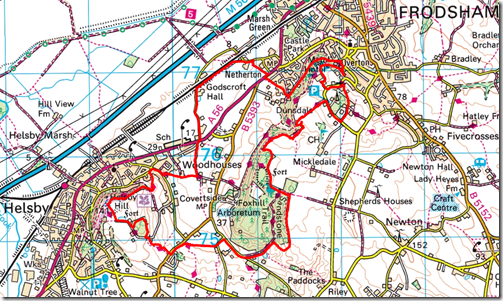