….has suffered a bit of damage.

Over the last year I’ve noticed that my Hilleberg Akto has suffered from a leaky groundsheet. It coped okay on TGOC 2012 but on subsequent trips I’ve seen dampness, and more recently wetness becoming evident under my sleeping mat in the mornings. I suppose the groundsheet of a one person tent isn’t designed to take THAT much hammer. Having said that, I know of many Akto groundsheets that have survived much more abuse for far longer than mine. I was probably just careless in pitching the tent – it only takes a prickly field.
There wasn’t any one point where moisture was getting in, it seemed as though the groundsheet was developing porosity over a substantial proportion of it’s area. Unfortunately this was the actual sleeping area. In spite of this leakage problem I still rate the Akto as a brilliant all-round backpacking tent. There are lighter tents – cheaper ones too, but the Akto is still the dog’s wotsits. In bad conditions I’m glad to have my Akto, it’s far more stable than my other backpacking tents. 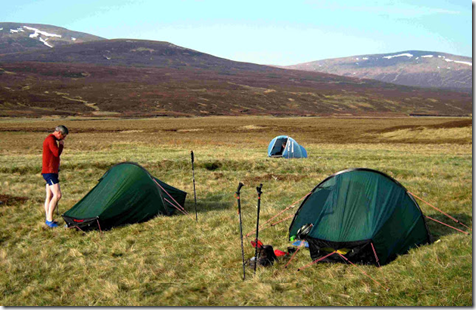 An Akto or two, pitched in the Geldie
Anyroadup, I contacted Hilleberg who in turn put me in touch with Scottish Mountain Gear in, er, Scotland. Scottish Mountain Gear are Hilleberg partners and as such are able to carry out repairs to Hilleberg kit to their quite exacting standards.
Two weeks and £50 later, my Akto was returned to me with a new groundsheet. To be honest it’s impossible to tell that a repair has been carried out – apart from the fact that it doesn’t have a leaking groundsheet anymore.
I can’t speak highly enough of Scottish Mountain Gear. Their repairs are carried out quickly, to a very high standard, and at a sensible price. Nuff said.
at June 29, 2013 9 comments: