A particularly stressful 7-8 months (just one cause of the recent silence here) demanded some very serious space and time to straighten my head and to come up with A Plan. …so that’s exactly what I did.

Firstly a trip with TH to Glaramara in Borrowdale, where there was much running up and down hilly stuff in the finest of company, eating far more than is good for a chap, then possibly over-rehydrating by way of lots of nice beer followed by more than one brain-straightening session with good mates, all helped set me on the road to recovery.

Next came a trip, perhaps a more spiritual trip than I expected, along a section of El Camino Via de La Plata in Northern Spain (should 'Northern' be written with a capital 'N'?). I was joined on this trip by Rob, who apart from being a chap made of The Right Stuff, proved to be an ideal walking companion: not once did he complain about my smelly feet, my whinging, or anything really.  Rob's one of The Good Guys. And he takes wonderful photographs. 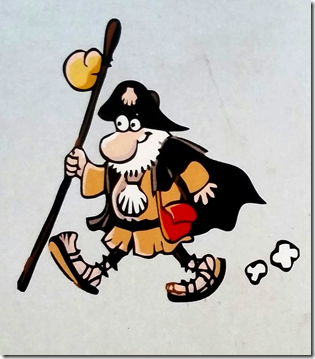 Then there's a short backpacking trip to That Yorkshire... well,  the Yorkshire Dales atcherly. This hasn't happened yet, but it's going to happen, next week. I know this because I've now booked my train tickets to Clapham. No, not that one, the real one... in That Yorkshire. This has been arranged by Lucky the Dog and his kilted Dad, The Pieman. Also in attendance will be Dawn, Chrissie Dixie... and maybe a doggy or two.  There may be more attending, I don't know, I'm just very grateful to have been invited along.

I was most fortunate to be able to squeeze myself onto this little trip although I wasn't able to spend as much time there as I'd have liked.

Arriving on Friday evening I was greeted by the rain and the general greyness that only Cumbria can provide. The gloom was soon lifted: I was sharing a room with Rob (no that one, the one that runs up and down hills at lightning speed), and the bar in Glaramara served Coniston Bluebird and the seriously excellent Loweswater Gold (a new one on me). The usual suspects were already in residence, having arrived either early that morning or even the previous day. My late arrival only raised a few eyebrows,  but there you go.

A very convivial evening followed, excellent food, good conversation, and maybe a beer or two more than was wise. 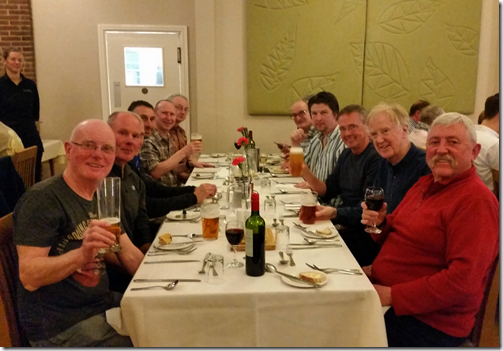 Next morning,  after a huge breakfast, I set off in the company of Ding Dong,  to follow the sawdust trail set by Doggy Burston. The trail was reputedly 10.5 miles, up Langstrath to Angle Tarn, over the tops of Allen Crags and Glaramara, then eventually back to our digs. 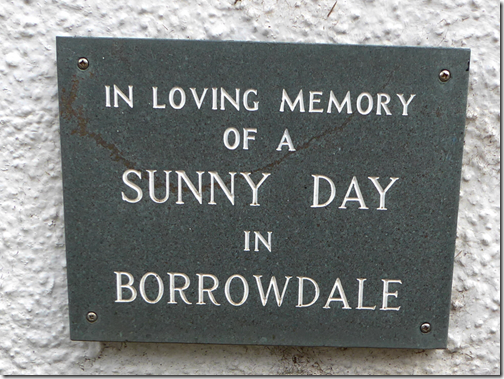 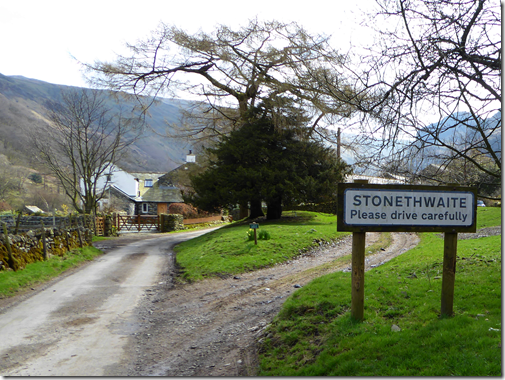 We came upon Big Ian who had, perhaps wisely, opted out of running and decided to walk the route.  Ian has long and powerful legs, he was round the route in quick time.

Approaching Angle Tarn we spotted Wells the Elder coming up behind us. He didn't fall into the beck once, unlike someone else who shall remain nameless (Ding Dong,  seeing as you asked). Paul stopped for a quick chat before powering off over Allen Crags and the glories of Glaramara's 783m top. 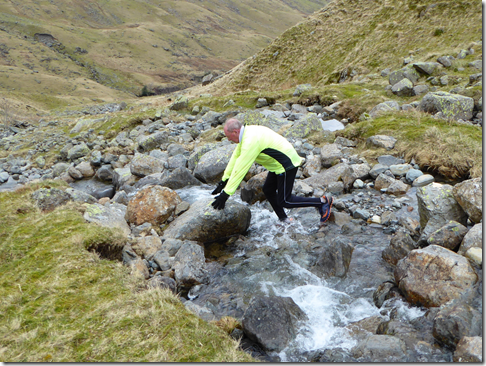 An un-named runner not quite falling into the beck

The next lot to catch us were the Fast Pack of McHarry, West-Samuel, Whitehead and Biker. A minute or so later Old Ruddock appeared and declared that he'd had enough of this nonsense and decided to join us on the descent by Grains Gill.... but we didn't see him again. 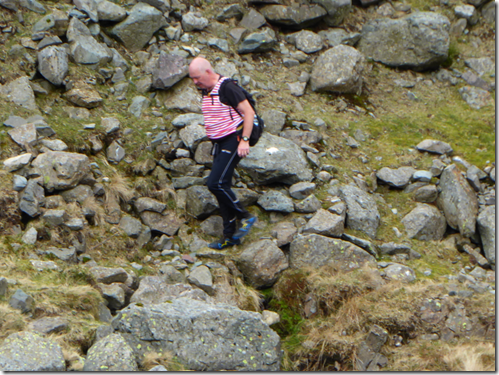 A fast(-ish) moving Wells the Elder

Next up was Potter, sporting his usual grin - he also trotted off in the direction of Glaramara. 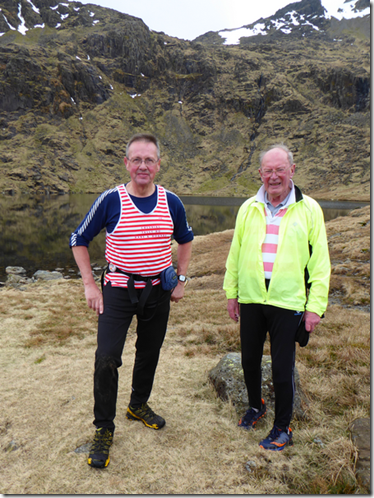 Jenkinson, Murray & Co were next on the scene - Murray sporting the latest hair style that has become so popular among high-speed fell runners. I don't know how he keeps it out of his eyes.... maybe he just runs so fast the problem doesn't arise. 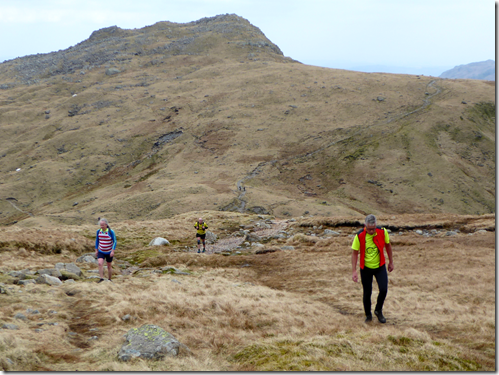 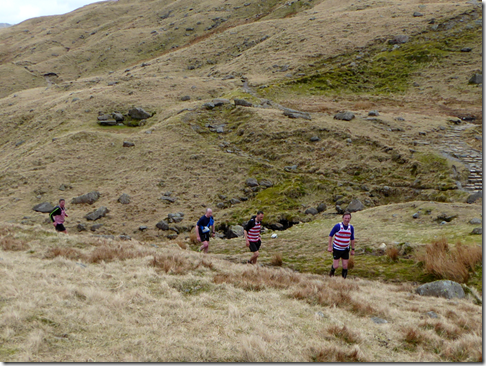 The arrival of McHarry & Co 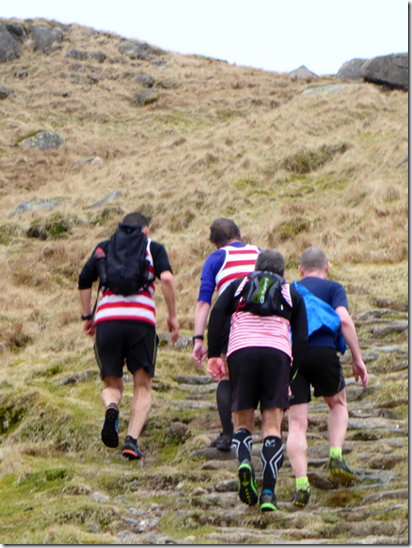 The departure of McHarry & Co

Fast Taylor was next, running alone.  He tells me he's the strong and silent type.....well he's strong anyway. 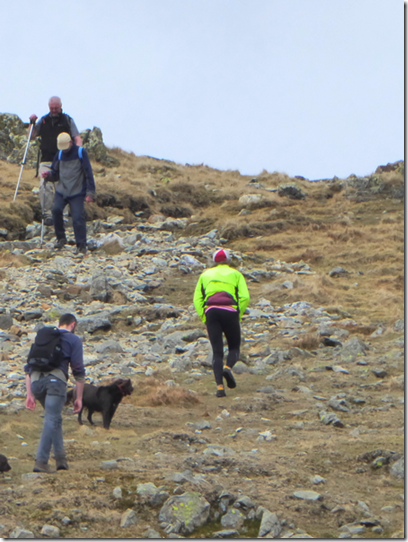 David and I,  along with some others, had realised that the trail might be a tad longer than the stated mileage. We took the executive decision to bale out at Allen Crags and trot down Grains Gill to return to Chateaux Glaramara via Seatoller. This proved a good move, even with our short cut the route was still 12 miles, quite long enough.

The day was warm but there were still signs that the area had been very recently splattered with lots of the white stuff: 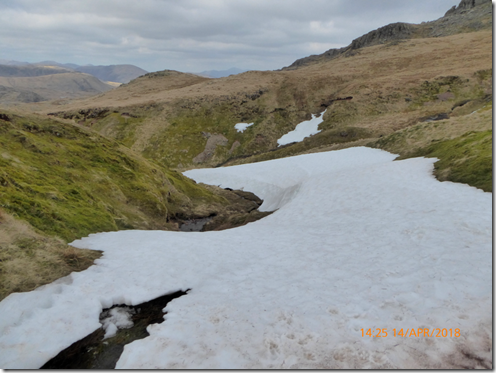 On our return to base we discovered that Burston had taken a tumble whilst laying trail. This necessitated a trip to Keswick's Minor Injuries clinic where he was treated by Nurse Whiplash.... and a satisfying outcome involving 4 stitches. Both nurse and patient appeared to have enjoyed the pain. 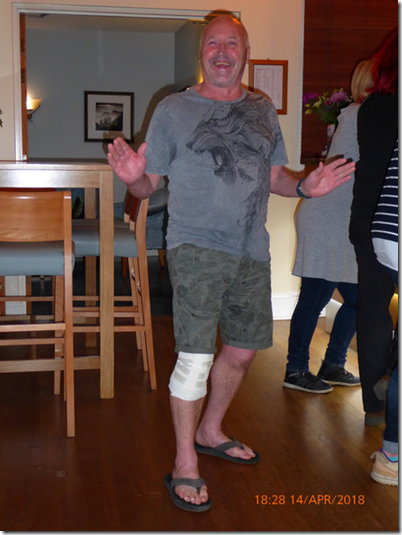 More good food, a damned quiz (I escaped to the bar, along with other quiz cowards), then lots of good conversation, laughs and a few tears for those recently lost, and maybe a little more of the Loweswater Gold, all conspired to keep us going until well past midnight.

Next morning, at 7.30am, and after overnight rain, those daft enough to feel competitive took part in The Fell Race. The trophy,  the Side Pike Bottle, has quite a history to it. Presented to The Club in 1930-something by the Bass Brewery, it has become the subject of some derision. It's hardly a thing of beauty, but everyone wants to win it.  Apart from me. 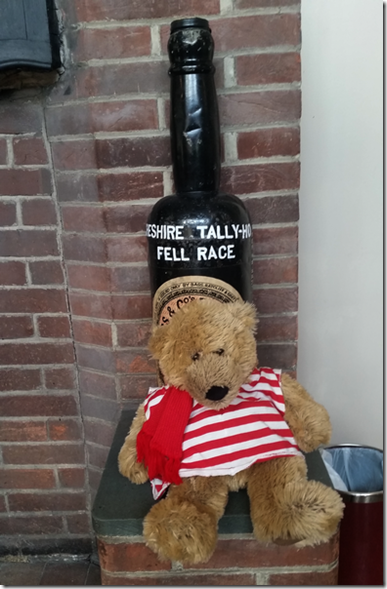 The Side Pike Bottle….and minder

The race is handicapped, I strongly suspect that the winner is chosen in advance and the appropriate handicaps are then dished out.

This year's worthy winner was Fast Taylor who's living room is now adorned with the winner's trophy.  His wife will be very pleased.  So he tells me. 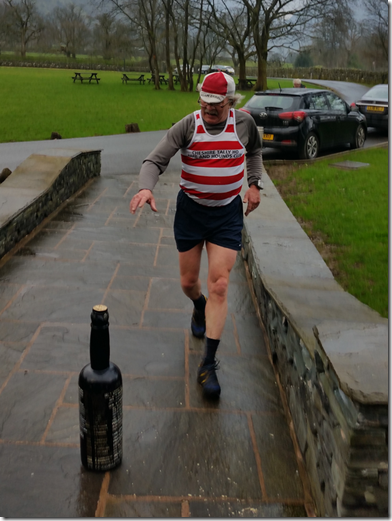 Fast Taylor, first in on The Fell Race 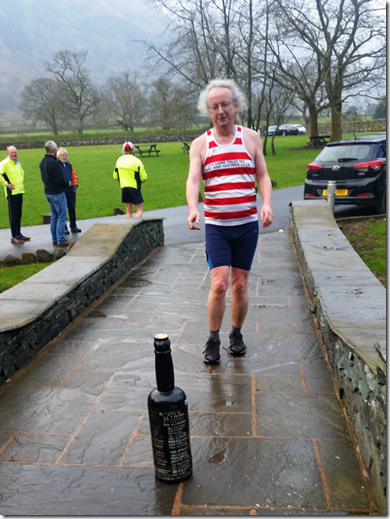 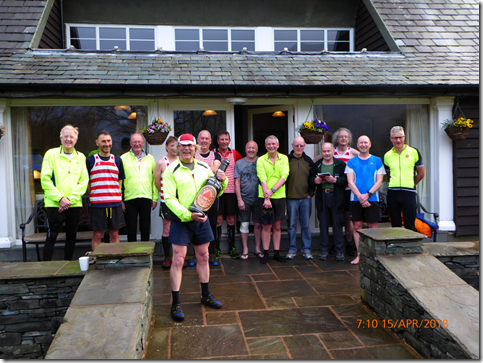 After breakfast I left the guys to continue their Cumbrian Adventure whilst I scooted southwards and home. I'd managed a much needed quiet and stress-free break, but there was packing to be done for the next adventure.

P2P recce with Judith, a UFO, and a wild camp.

The reason for this test is the continuing problem I have with posting using Open LiveWriter…. The Plan (there’s sometimes A Plan) was to... 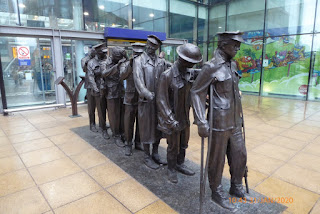