Modern electronic equipment is the curse of the radio enthusiast. The amount of interference generated by computers, television sets etc, is enough to flatten weak radio signals. The RF crud generated by normal household electronics is strong enough to completely wipe out radio reception. Even seemingly innocent kit can cause problems: some mobile phone battery chargers, some low energy lamps, the dreaded BT wireless hubs, the awful PLA/PLT 'data-over-mains' devices, switched mode power supplies, plasma TVs (these really are bad news), the list goes on and on.
For those who aren't radio enthusiasts but live in an urban environment, you can get an idea of how bad this interference is by tuning around on an AM radio, indoors, in the evening. You'll probably hear plenty of radio stations, but you'll also hear lots of whistles, heterodynes, buzzes, mushy noises etc, that shouldn't be there. Put your AM radio next to a (switched on!) PC or TV and I'd be surprised if you can hear ANY broadcast stations.
It's a legal requirement that electrical / electronic equipment shouldn't cause radio interference - but trying to enforce the law is far easier said than done. There's a huge amount of kit for sale on the high street today that's illegal - it just doesn't meet the RFI / EMC regs. Such is the influence and power of large corporations, they very often hide behind their product's 'CE' marking. I could go on about illegal 'CE' markings....but I wouldn't want to bore you.
This is all bad news for me, I've not been able to play radio for a while. I've experimented with different aerials with varying degrees of unsuccessfulness.
My first major attempt at quiet radio reception was this active, untuned loop. The circuit and notes are published on the QSL.net website of Des, M0AYF - and very good it is too. Thanks Des!
This is the circuit diagram:

The active loop aerial is situated about 35-40 ft down the garden, mounted at around 6ft above ground level.
It's certainly better than my 80m dipole on receive but it's still susceptible to picking up man-made noise - although at generally lower levels. I find it pays to switch between aerials to see which receives less noise - sometimes the dipole wins
My latest attempt at reducing received noise is this little piece of kit I put together this evening using bits from my junkbox: 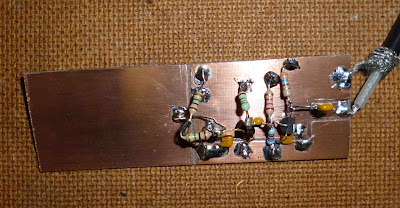 This is the ENTIRE antenna - apart from it's power supply. The aerial bit is the plain bit of board on the left, the electronics on the right is a buffer amplifier that matches the extremely high impedance of the small aerial to the low impedance input of the receiver - it provides a significant amount of gain too.
It receives power down it's coaxial cable, and with a little bit of filtering at both ends, there is no need for batteries or separate power feed cables.
It's tiny - and it seems to work quite well. Although received signals are down on the dipole, received noise levels are WELL down = much easier to copy weak signals that would otherwise be swamped by man-made interference.
It's an E-Field probe so it receives RF by capacitive coupling to the electric field rather than a magnetic field.
There is good evidence to suggest that the magnetic component of interfering domestic sources such as TV line time bases tends not to be significantly confined within a building whereas the electric field tends to be significantly attenuated by the structure. This can work to the advantage of this small aerial if it's mounted at a reasonable height and clear of mains wiring & buildings.
I can't claim any originality for this idea, it's the brainchild of Roelof Bakker, PA0RDT - quite a whizzkid by all accounts, and my thanks go to him.
Details of the aerial are widely published on t'interweb but I settled on the article published on the Crawley Amateur Radio Club's website and my thanks go to them also.
Tomorrow, time and weather permitting, the aerial will be mounted remotely down the garden.
Perhaps lower noise radio-activity will return to Timperley soon.
at January 24, 2013 2 comments:

Wednesday 12th September, Getting the aerial up higher

Winter is approaching fast so I’ve been messing about with my aerial system at home.
The aerial is a half-wave dipole for 80m fed with twin feeder. My garden isn’t long enough to squeeze 132’ of wire in a straight line so the ends are folded down. The centre of the dipole was only at about 22’ agl, nowhere near high enough for the system to be an effective radiator. It performed adequately but that’s all.
Time for a re-think. I’ve managed to get the dipole centre up to around 30’, still not high enough but certainly better. This afternoon’s little job is to make a coax balun although the poor weather means it probably won’t get installed today.
The aerial is now certainly a better radiator on 80m & 40m, but receive noise is still a problem. Next door have a noisy TV, it may be plasma…the work of the devil!  Unfortunately my neighbours are unapproachable so I need to deal with the problem on my side of the fence. The RF noise next door’s TV generates makes 80m difficult to use in the evenings. I’ve treated myself to a noise canceller (MFJ1026)but I’ve not tried it out yet, I just hope it works!

MFJ1026 Noise Canceller
This little box works by mixing signals from the main station aerial with signals from a ‘noise’ aerial – an aerial that is aligned to pick up the interfering noise. The phase and level of the interference is then altered by the box in a manner that allows it to cancel out the noise received by the main aerial = much reduced noise. That’s the theory, we’ll see.
My main interest is using low power (2-3 watts) CW (morse) on the 40 and 80m bands. Winter is a good time to play radio, hopefully my tweaked aerial system will pay dividends.
Apart from the noise canceller, my main station will remain unchanged: Yaesu FT817 transceiver fitted with a narrow CW filter, and a Bencher squeeze key. A ‘T’ Match ATU is used to optimise the match between transceiver and aerial system. 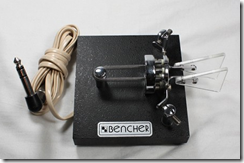 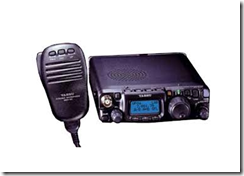 My FT817 has a microphone but it’s rarely connected – it just gets in the way!