July in Holland can only mean one thing: Vierdaagse…the Nijmegen Four Days Marches, when 45,000+ happy walkers from all over the world converge on Nijmegen to go for a bit of a walk.

If anyone can show me how to successfully embed a YouTube video into this blog I will buy you beer.

History of the event is here.

I flew from Manchester to Schiphol then travelled by train to Nijmegen. Trains, often double-deckers, run on time in Holland, and there are loads of them. And they’re clean. And comfortable. And train fares are definitely affordable: one side of Holland to t’other for less than £20. British train companies could learn a lot from the Dutch. 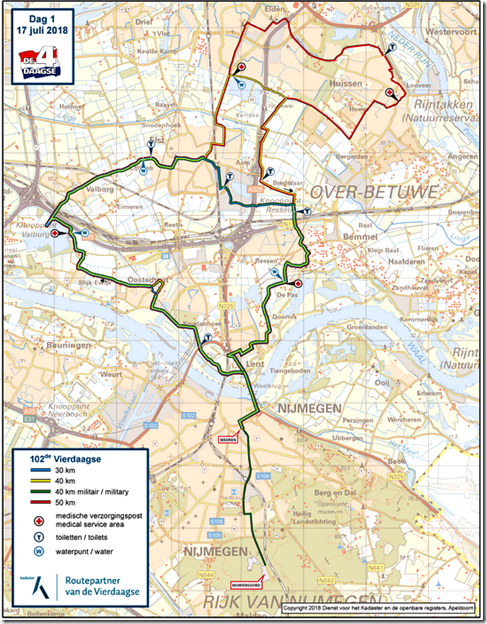 My allocated start time of 5am meant I had to be up and about by 3.30am, time for a decent breakfast and the 2km walk to the start. It was hot, 22degC, even at that time. Many of the good folk of Nijmegen had been partying all night in readiness for the start – they know how to enjoy themselves in this part of Holland! 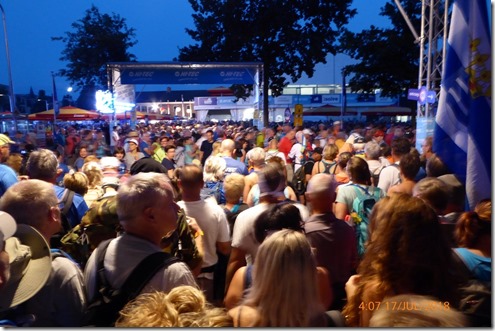 Queueing at the start 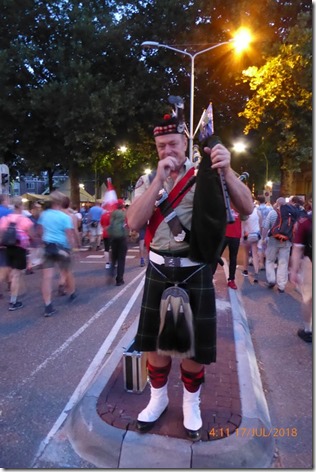 Being piped out from the start

The Dutch are very fond of Scottish pipers and pipe bands, this piper was just one of many I came across on the Marches – he wasn’t walking the route though! 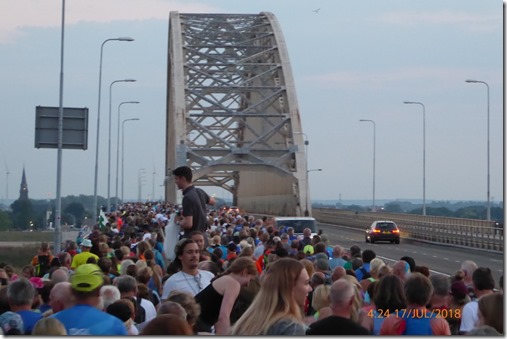 Bridge over the River Waal

A couple for Alan R: 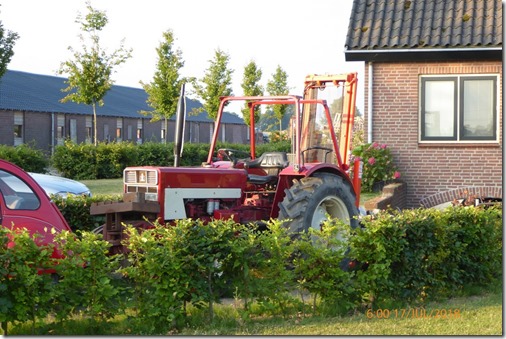 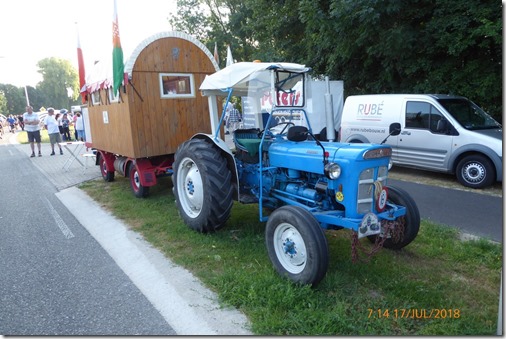 Times on some of these photographs is an hour behind ‘real’ time, I’d neglected to change the clock on my camera….duh. 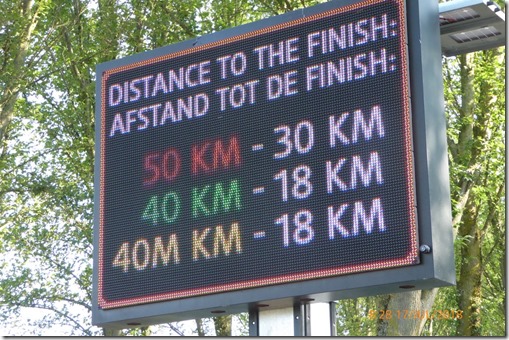 18 km to go at 9.30am and it was now seriously hot. I was carrying 2 litres of water, I topped that up with 500ml of SiS hydration stuff. It was only just enough. 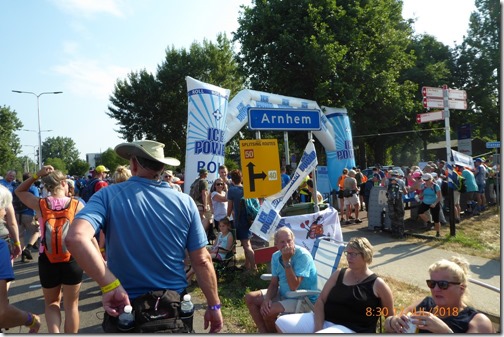 Entering Arnhem at 9.30am

The atmosphere on the Marches is quite unique. walking in the company of 45,000 walkers, a mixture of military and civilians, is something that’s really special – as the Dutch would say.

Every village you walk through celebrates the event, civic dignitaries turn out in their finest regalia, bands play on street corners – it’s a huge party and I love it!

Many rufty-tufty walkers criticise the event as not offering ‘proper’ walking because most of the routes are now on tarmac and, lets face it, Holland is pretty flat! Despite all this, 100 miles in four days isn’t a walk in the park…it IS fun though! 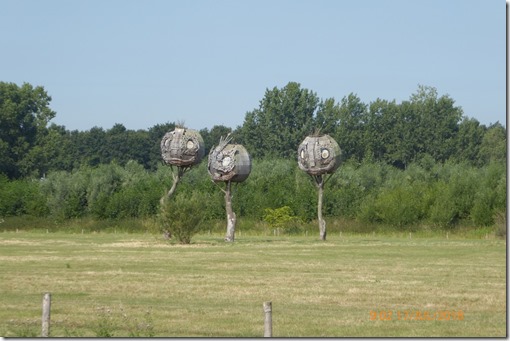 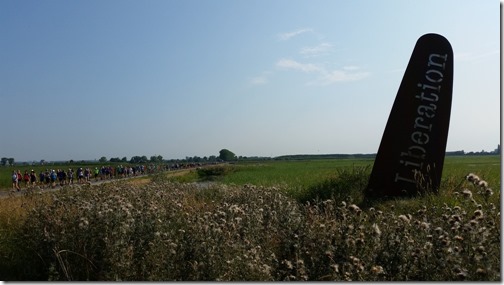 In memory of WW2, the Dutch suffered terribly 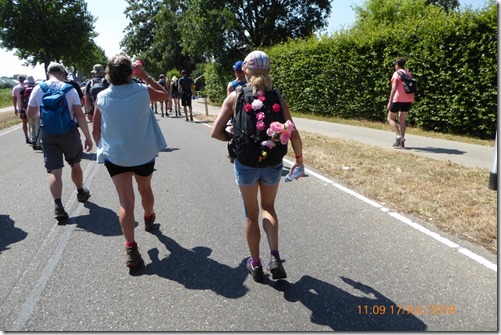 Flowers - where ever possible 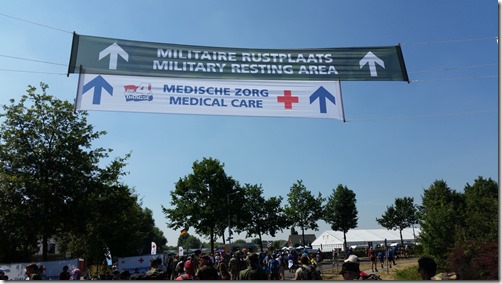 Time for a breather for those in the know 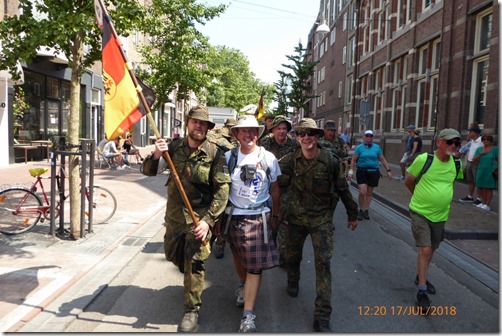 Cavorting with the German Army 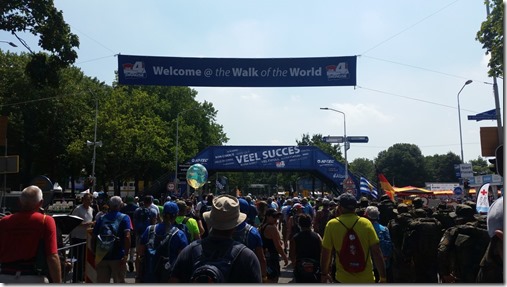 Almost the end of Day 1

I clocked into the event centre in the Wedren around 1pm, 25 miles in 8 hours, including a 20 minute rest stop. I was quite happy with that time, especially considering the heat of the day which was hot. Very hot in fact. 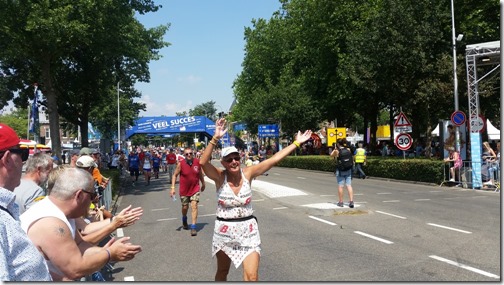 I wandered back to my accommodation, walking back along the route and cheering the later finishers – the were all (mostly) smiling! 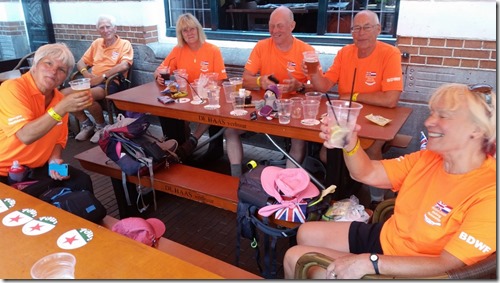 En-route I called for a quick beer with The Irregulars at a bar in Nijmegen….they recognise the importance of re-hydrating after a long walk in the heat.

After a shower, a good feed and another cold beer, I hit the sack at around 8.30pm. I needed a decent kip before the exertions of the next day and it’s later 6am start.