The good folk at Viewranger have improved their already very good navigation app. In order to make sure that it ticked all the right boxes a number of guinea-pigs were recruited to drink coffee, play with the new app, go for a nice little walk…and to drink some beer.

Oli, of Viewranger fame, had arranged this little jolly that had a select group of outdoorsy-types gathering in Castleton at the unearthly hour of 11am….that’s the 11am in the morning, in case you were wondering. Oli, being a sensible sort of chap, had brought reinforcements from Viewranger in case the group decided to revolt at some point during the day. The reinforcements happened to be quite expert on all aspects of the app and they were able to answer any questions we may have had. Like ‘when do we stop for lunch?’. 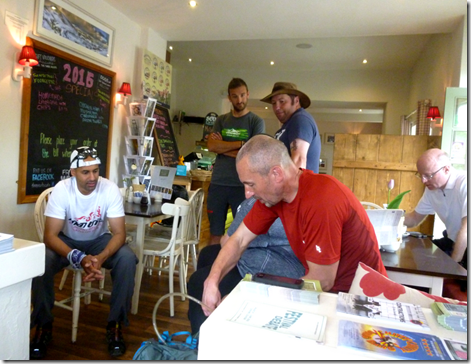 Those of the gathered throng that didn’t have iPhones or iPads (we were testing the Apple version) were issued with appropriate phones or tablets. After a quick chat to describe the new features and to make sure we were all sufficiently up to speed with the app we were released onto the Peak District’s unsuspecting hills using Viewranger to navigate Oli’s route.

If you’ve already got Viewranger you can view the route here , it’s a nice little route that was designed to test out the new features of Viewranger. 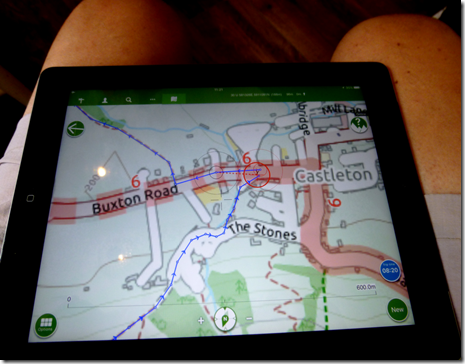 A fine pair of knees and the ‘new’ Viewranger screen

One significant additional feature of the new Viewranger are the abililty to be able to identify hills and other features simply by activating the device’s camera and pointing it in the direction of the area of interest. They call this feature ‘Skyline’. This is done using the button on the top right corner of the screen – the one with a question mark. The result is something like this (but without my reflection): 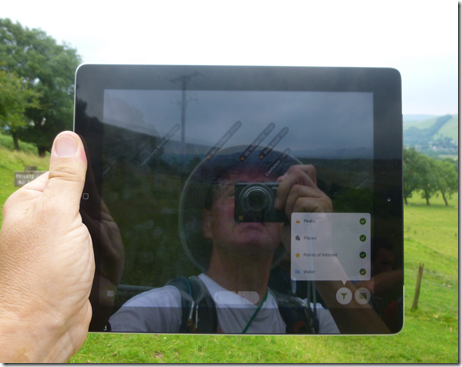 I’m afraid the image above doesn’t illustrate the facility too well. In reality it’s really good and makes Viewranger an even more valuable aid to navigation. The diagonal labels on the screen indicate the various tops, their height and how far away they are.

The little window on the bottom right corner of the screen selects various filters: Peaks, Places, Points of Interest, and Water. Water filters are good.

Another additional feature is the little arrow at the top left corner of the screen. This comes into play when following a route on the app; it points you in the direction you need to be travelling. Good eh?

It’s also possible to grab a screen shot which could be saved, emailed or whatever.

It was hot in Castleton, not as hot as the previous day’s 31degC, but still very hot. With this hotness in mind, the route had been tweaked* slightly to avoid the risk of heatstroke, premature exhaustion, dehydration etc. 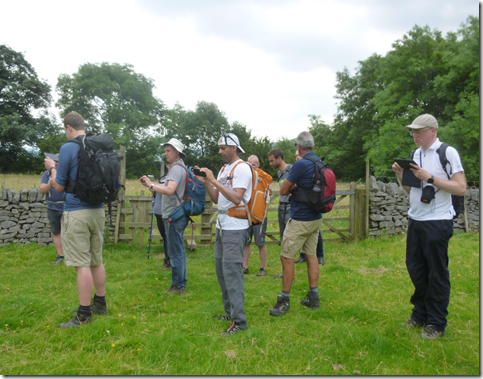 Getting to grips with the new app 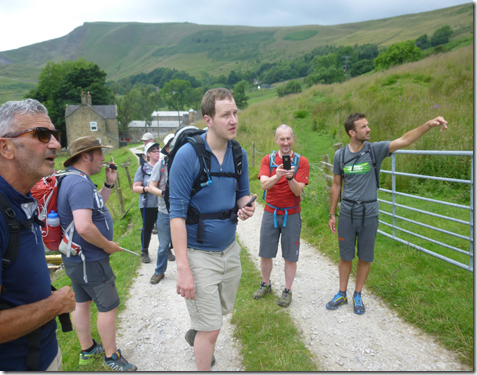 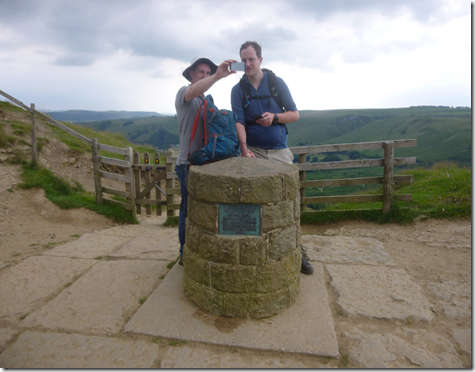 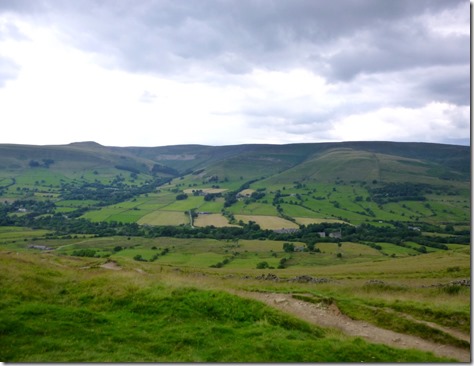 The Vale of Edale 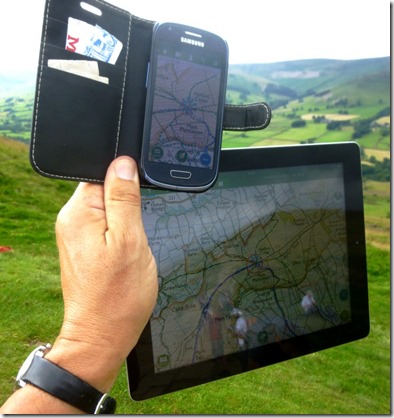 I didn’t find much difference in the performance of Viewranger operating under Android or Apple (IOS?) although the much larger screen size of the iPad made the app easier to use – and the maps considerably easier to view.

The screen of a smart phone is infinitely clearer than most dedicated GPSs – certainly better than both my SatMap10 and Garmin Etrex20.

The Skyline facility is certainly far more than a gimmick, it’s a really useful navigational aid. It enable the easy identification more distant features. It’s also possible to customise Skyline. From what I’ve been able to deduce, points of interest can be added to a map or route and these features will be indicated on the Skyline. In addition it’s possible to add route notes, such as ‘Steep decent ahead’, ‘Dragons be here’ etc.

This latest version of the app is initially only going to be available for Apple devices but the Android version is due for release around October. 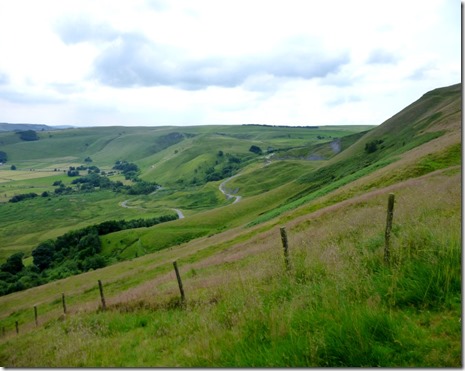 The old Stockport to Sheffield road, closed due to repeated landslips since 1979. I last travelled this road in the early 1970s on my old Triumph T90. Happy days! 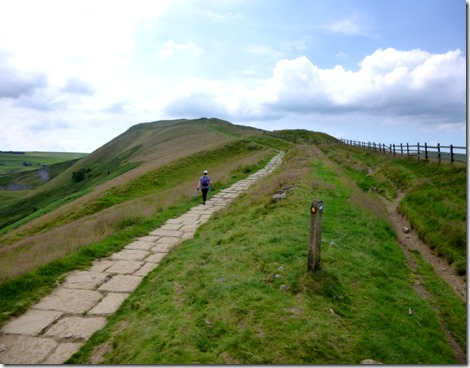 To misappropriate a Bradburyism: ‘The final assault on the summit’ of Mam Tor 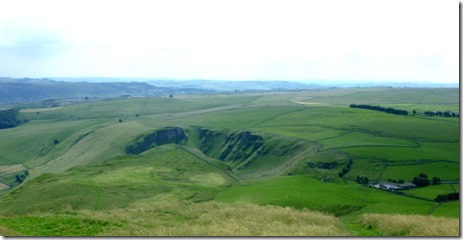 The gash in the landscape that is Winnats Pass 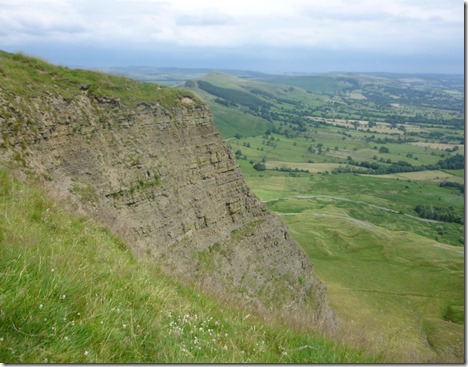 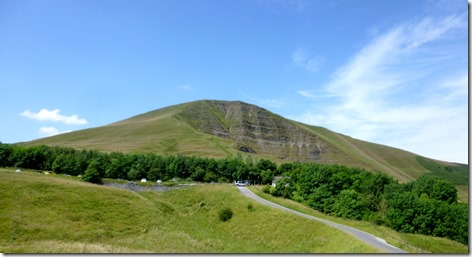 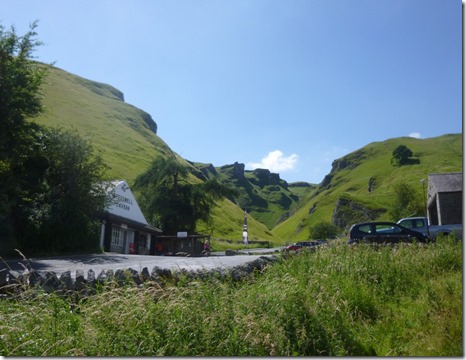 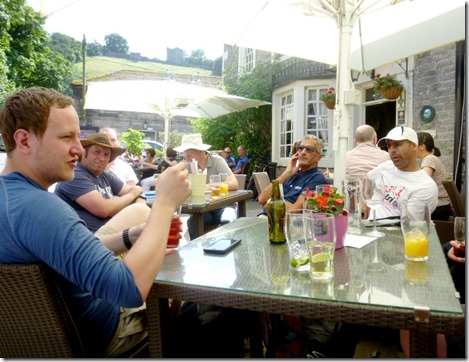 Chilling at the apres debrief 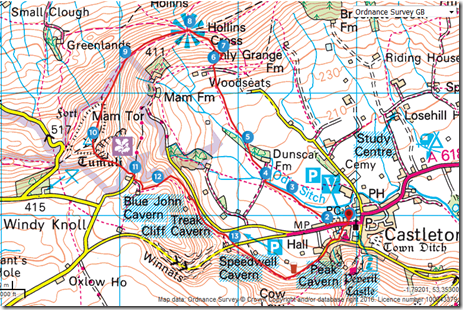 Oli’s description of the route:

Starting from the Castleton National Park Visitor Centre, this walk initially follows the stream of Odin Stitch with great views of Mam Tor before breaking right towards Hollins Cross and the Great Ridge.
A left turn at Hollins Cross provides some wonderful high-level walking that eventually leads to the 517m summit of Mam Tor.
The descent route leads through disused mines and past the impressive caves of Blue John, Treak Cliff, Speedwell and Peak Caverns on its way back to the pubs, shops and cafes of Castleton.

I’ve played with Viewranger on and off for a few years but not spent much time learning it’s ins and outs, prefering to stick with my Garmin Etrex20. With Oli and his Viewranger buddies being on hand I soon discovered that the app is really quite straightforward and easy to use – and it’s very useful.

Thanks to Oli and his team from Viewranger for a pleasant few hours wandering around, the teas, coffees, beers etc – and their good company.

I was home in time for tea.