Out and Round Cut-thorn Hill

The persistent rain drifted away to the east before the club arrived at the Crag in Wildboarclough but the clouds still loomed low over the hills. Brown and Riley had set a trail that led straight up the hill across the road from the pub although just below the tree line we veered left instead of the usual right and headed past Firs Farm and onto the road by Crag Hall. A right turn and a brief run up the road ensued.

It wasn’t long before we left the road to disappear on our right as we took to the countryside again. It was still uphill until the main road. We shot across the road and descended quite steeply to the side of Cut-thorn Hill. We followed the road down to Knar, where we took a left turn to drop down to cross the River Dane before setting off uphill yet again.

The advertising email that was sent round prior to the event promised a runnable course. It probably would have been if we had been 20 years younger. The first 3 miles or so was predominantly uphill so maybe the second half would be down. The clouds had gathered and we ascended into them, limiting the views to the back of the runner ahead. 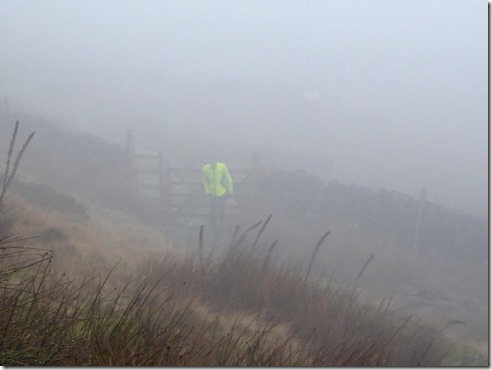 We turned sharp left to run below Turn Edge, slowly veering right to cross the edge and a slight downhill to Knotbury Farm then up to the high point of Wolf Edge. 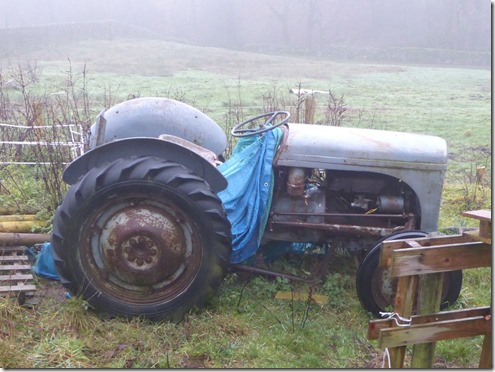 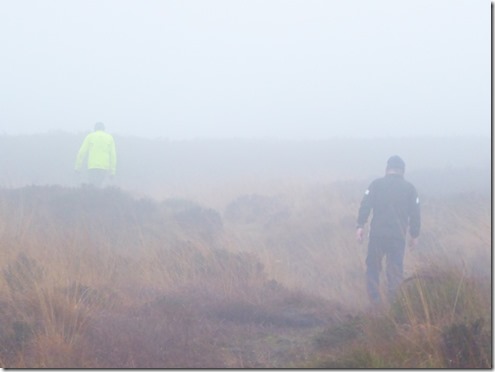 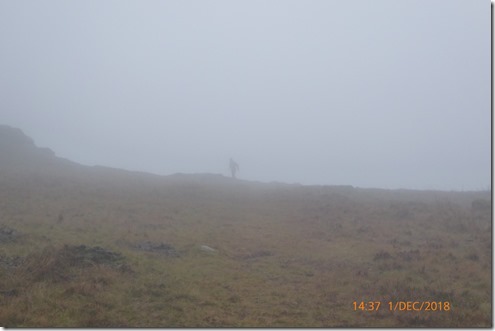 Running in the murk

A sharp left from the top and we ran down to the road at Oxenstitch. A left at the road and it was uphill again. We ran along the road for a bit taking the left fork at the junction and up to Readyleach Green before leaving on the right to run round Knotbury Common. 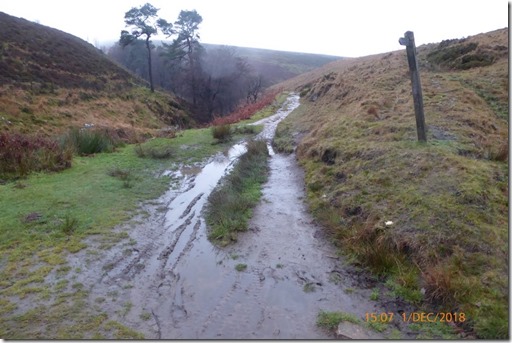 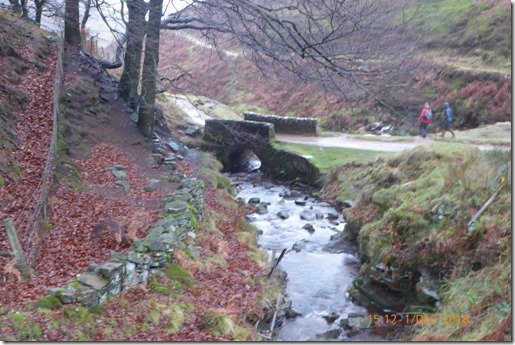 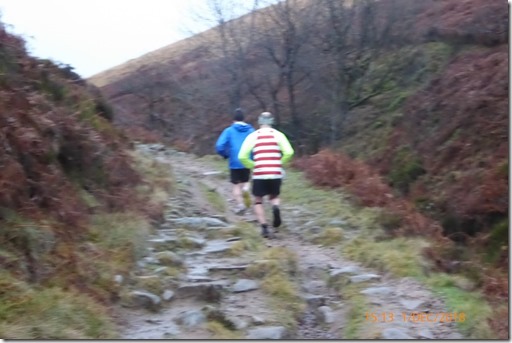 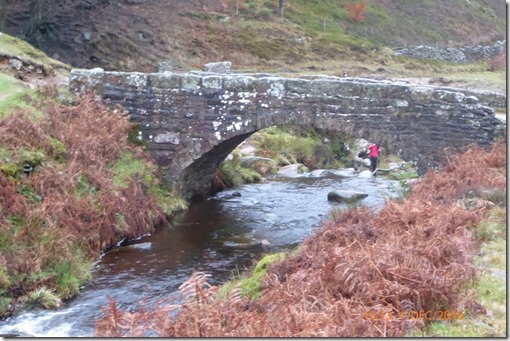 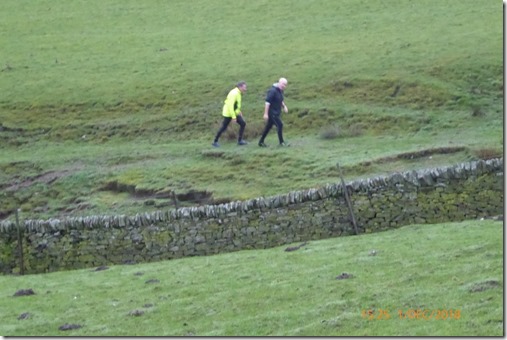 As we dropped into the clough and met the stream we turned sharp left to follow the stream down to Panniers Pool at Three Shire Heads. 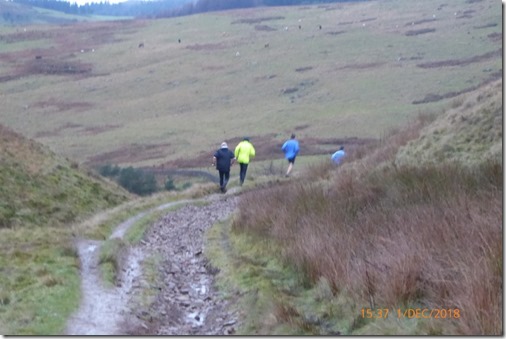 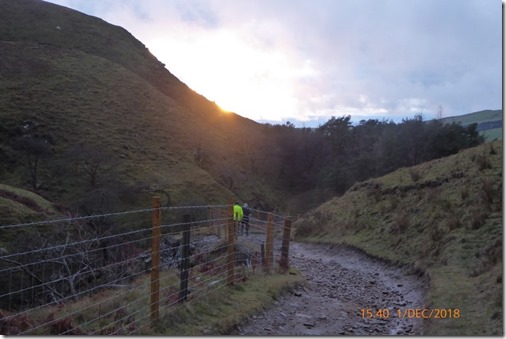 Here we turned right and had to run uphill again, eventually finding our way to the A54. Straight across past Sparbent we finally had a downhill section and followed the clough down to the head of Cumberland Book. Here we turned onto familiar ground and “ran” down the very rough track to Crag House.

Crossing the road we had another uphill along past Banktop and down the steep road back to the pub. 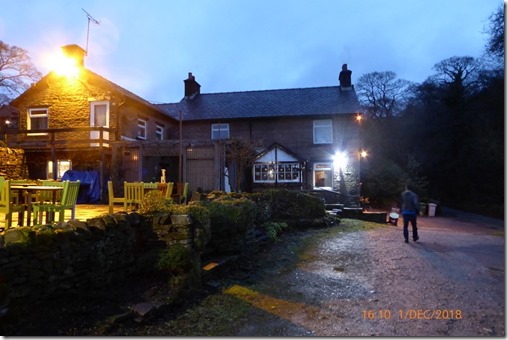 The trail was very good, with much unfamiliar ground. The clouds cleared at the end to show Shutlingsloe outlined against the darkening sky, with only a little shower or two to suffer on the way round. McHarry managed to cut the trail short but did some extra when he arrived back. Pres Park took exception to a rock and headbutted it getting muddy as he did it. Park had a lump on his head. The rock was not seen again. DingDong Bell was out again after his accident last run, but only for a gentle walk along the flat with his finger encased in plaster.

The pub was now run by a new regime, with the old dining room now sealed for the production of bottled water. It was decorated for Christmas with two nice wood fires warming the room. The beer was good and the food very good. A steak and mushroom pie with chips and veg showed every sign of being homemade and very well done as well.

The Sticky Toffee pudding was very light and not too sweet. All were content and headed off in anticipation of the Championship. 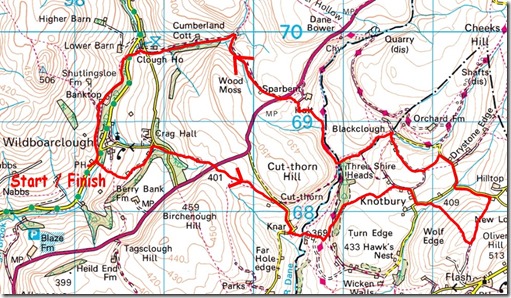 Words by Wells, Pics by JJ