A couple of years ago, not long after my L knee operation, I felt in need (kneed?) of a short trip to try out my repaired knee. The Sandstone Trail was to be the test bed.
Wikipedia describes the route as “a 55-kilometre long-distance walkers' path, following sandstone ridges running north–south from Frodsham in central Cheshire to Whitchurch just over the Shropshire border.” It sounded just the job!
The official start of the route is from outside the Bear’s Paw in Frodsham where an attractive obelisky-thing marks the spot. The sun shone brightly, I was looking forward to a pleasant trip in good weather. 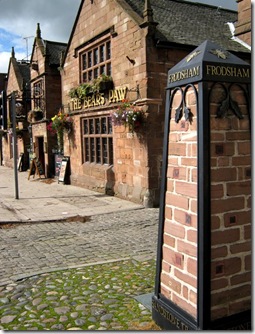 The start in sunny Frodsham
Walking through the town towards the sandstone edges it would have been very easy to tarry and enjoy the town of Frodsham. It’s a real place, full of real people, real shops – and real pubs. It was perhaps a blessing that I was starting this walk BEFORE the pubs were open, Frodsham pub exploration will have to wait for another day…and there IS a plan!
It’s a bit of a tug up the northern face of the sandstone edges, quite a rude awakening after a pleasant train journey and a quiet meander through the town. The edges are quite familiar to me, Cheshire Tally-Ho! Hare & Hounds Club run around this area every year. 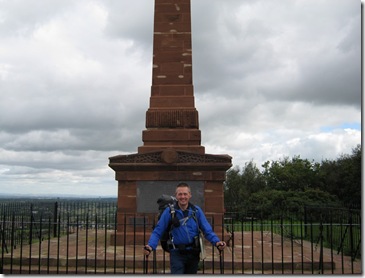 A quick pose by another obelisk, the War Memorial, also marked the end of my climbing for now. Although it was dry and bright, the wind on the tops was chilling and I needed my windproof. 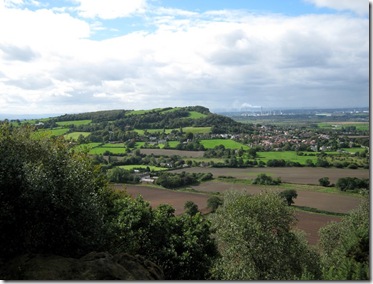 Helsby Hill
Following the sandstone edges in a sort of south-ish direction, there were tremendous views of the flatness of the Cheshire Plain. I had to watch where I put my feet – parts of these edges are quite exposed and it would have been easy to end up taking an unwelcome tumble. 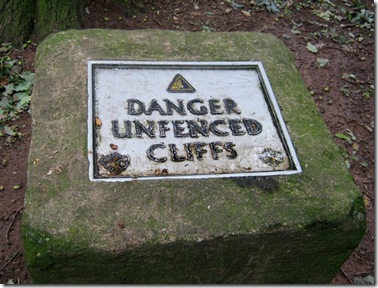 I was looking forward to having a look around Woodhouse Hill Fort, the remains of an iron age settlement. When I’ve been here with the running club there hasn’t been time to nosey around. There’s not a great deal to see – building standards weren’t up to much in those days. 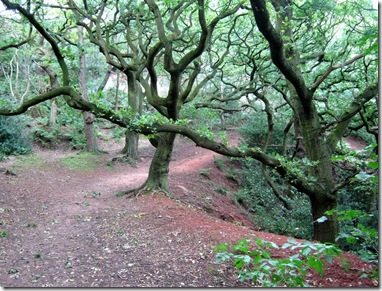 Once off the exposed edges, the wind dropped and it got rather warm. A butty stop at a conveniently situated bench took longer than I’d anticipated. Lots of people wanted to stop and chat – they all wanted to know what I was up to and where I was going. This northern section of the route was by far the busiest part.
The well signed path took me through farmland, woodland, short stretches of quiet tarmac, and eventually into the remnants of the ancient hunting forest of Mara & Mondrum – Delamere Forest. 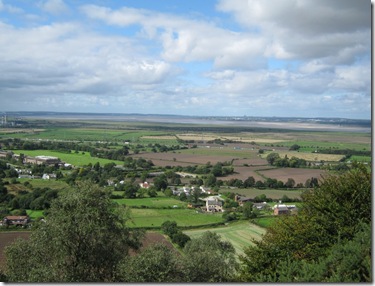 Looking across the Mersey estuary to Liverpool in the far distance
The forest had been used for hunting by Earls of Chester and later the King. In the more remote areas of woodland it was easy to imagine hunting parties of old, out for wild boar and deer. 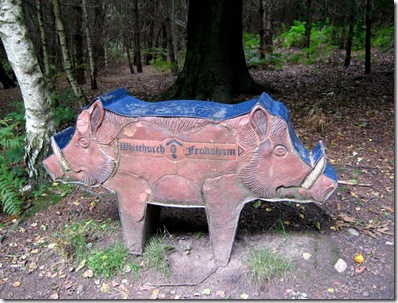 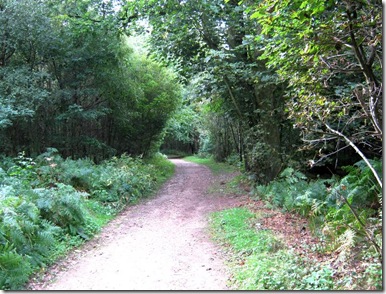 Cheshire is lovely but opportunities for wild camping are limited, certainly in this part of the county. Rather than scrat around trying to find a suitably concealed spot (not easy) with a water supply (all but impossible) I planned to spend my first night at the C&CC site in Delamere Forest. There were showers. And a fish & chip van. But no pub. Oh well. 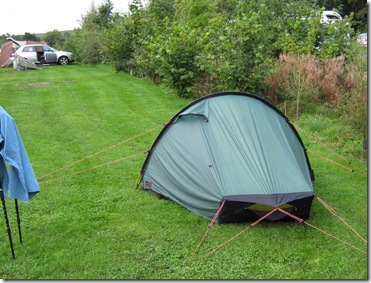 Delamere Forest campsite
Next morning dawned bright and warm, although the BBC R4 weather forecast wasn’t as optimistic as it had been.


Off again, through shady woodland and then a gentle pull up Delamere Old Pale – at the heady height of 176m ASL. The views from here were lovely although the recently constructed ‘stone circle’ spoiled the ambience of the spot.
The sun still shone. 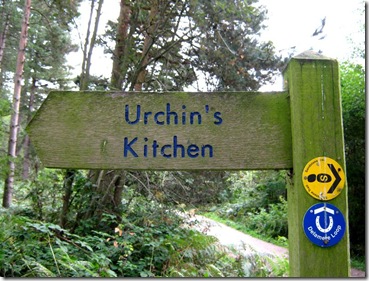 Here be urchins
I trundled on following the signed path. A map just wasn’t needed although I’d feel quite undressed without one. Lots of fungi grew in the woods, this time of the year seems to encourage growth. Perhaps due to shortening days and increased humidity? I don’t know, I’m only guessing. 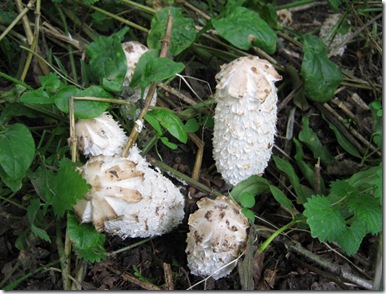 This area is popular with fruit growers. The light and sandy soils are good for growing fruit, whilst the sandstone ridge protects tender plants from chilly easterly winds. 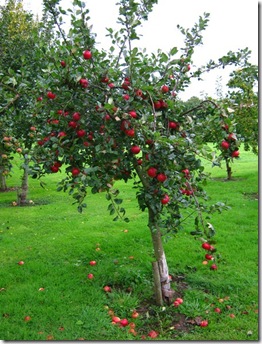 The Peckforton Hills came into view for a few minutes. Another bench seat conveniently appeared, just as my stomach started rumbling. I sat down to grab a bite but the rumbling continued – and the Peckforton Hills vanished. Thunder, lightning and heavy rain appeared from nowhere. I didn’t see the sun again for the rest of the trip.
Full waterproofs on, I continued south. The pleasant route had been transformed by the bad weather. It was now grey and dreary.
I caught up with a group of lads from Manchester who were walking the route, they were doing it over two days and spending their overnight spot at a hotel in Tarporley, a good few miles off-route. Their’s was a supported walk, they were heading for their pick-up point of  the Shady Oak pub, on the Shroppie. The pub would no doubt provide ever-so vital rehydration facilities, these lads were thirsty walkers. 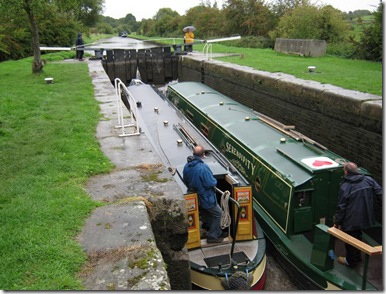 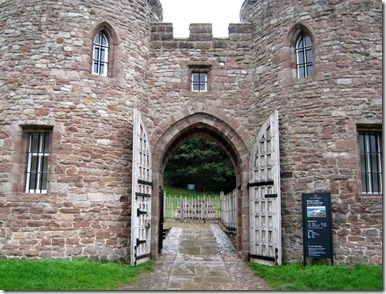 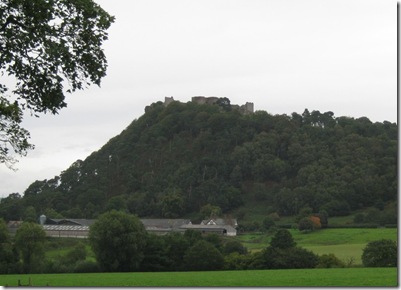 Peckforton Castle – not a REAL castle
Beeston and Peckforton Castles came and went. I just wanted to press on to my next overnight stop, the campsite at the back of the Bickerton Poacher pub. 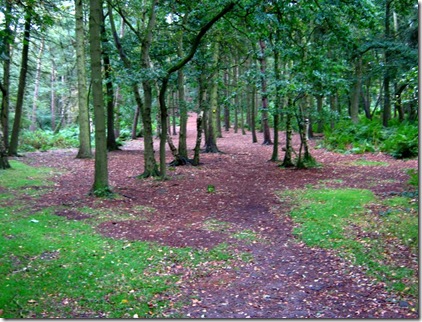 Splashing through deepening puddles I pressed on. It was now getting cold as well as wet.
It was late afternoon when I arrived at my overnight stop, the Akto went up in double quick time. I would have chosen to eat in the pub but I was carrying food that needed eating up. A hurried meal and a couple of mugs of tea later, I was sat in the busy pub wrapped around a pint. 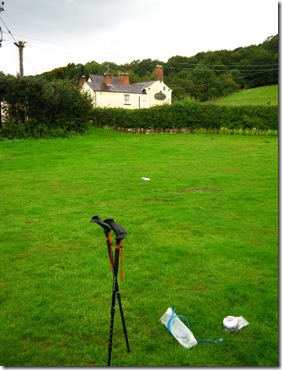 The Bickerton Poacher
It rained all that night. I discovered that a number of tents had gone from the site when I got up the following morning, their occupants had had enough of the wet and had made a run for home.
I left the campsite around 9am, walking south in light rain. The footpaths had become muddy quagmires, this wasn’t going to be a fun day for walking.
This part of Cheshire was host to dairy farmers rather than the fruit growers of the more northerly part of the route. Well fertilised, heavy soils produced rich grasslands that helped the dairy herds produce the rich milk used for producing Cheshire Cheese that this area is well known for. 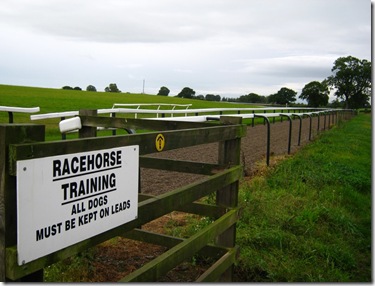 Cheshire is also a very affluent, race-horsey county. I’ve not seen such a concentration of shiny Range Rovers as at this race-horse training course (track?).
I squelched my way through muddy field-edge footpaths for what seemed an age, although in reality it was only a couple of hours at most.
Old St Chad’s ‘alone in the fields’ came into view. I hadn’t been here for over 20 years when I took my then young children out for a walk in the Cheshire countryside. The church, built in 1689, is still in use. Services are held here on several occasions during the summer including Rogation Sunday, Ascension Day & Rushbearing Day. Peering through the window it’s possible to see an old horse-drawn hearse – the camera didn’t do a very good job of picking it out! 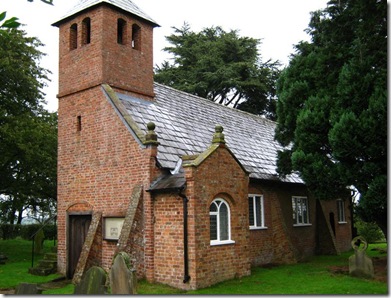 Old St Chad’s, ‘Alone in the fields’
It’s strange, but when I’m out walking I often feel that I’m in a different world – completely separated from the other ‘normal’ world. It came as something of a surprise when I got to Willeymoor Lock on the Llangollen Canal. I normally only see this place when I drive along the A49 between Tarporley and Whitchurch – it didn’t seem right that it should be here in my walking world! 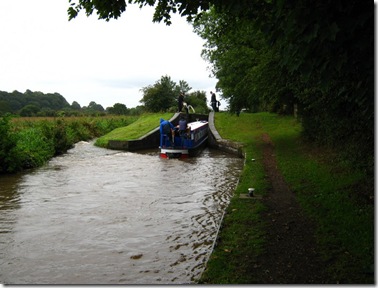 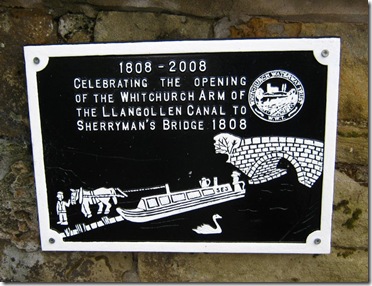 Another convenient bench, this time adjacent to the locks, made for a coffee break. I had just filled my kettle and was about to light the stove when a cheery boater offered me a coffee. Half-an-hour chatting with Mr & Mrs Boater was a pleasant interlude before I continued on my way following the canal towpath to Whitchurch – passing my next ‘other world’ place, Grindley Brook.
The 3 miles or so of towpath should have taken me directly into Whitchurch. Footpath diversions, a new road and a distinct lack of signs threw me off course. I eventually found my way to the route’s end.
I’ve long-since given up on the dream of finding a fanfare to greet me at the end of a multi-day trip, but I was rather disappointed not to find a marker indicating the end of the path. It was supposed to be in the local park. Some have said it’s at the park’s bandstand, others have said that it’s a curious little arch construction thingy at the edge of the park. 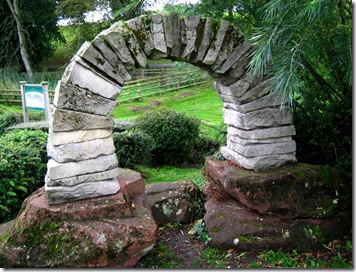 Is this the end of the Sandstone Trail? 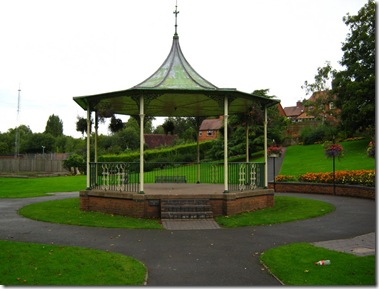 Or is this?
My disappointment was consoled when I discovered others who had just finished walking the route and were also in search of the ‘real’ end.
Isn’t it strange, I had walked around 35 miles and although I’d seen the lads from Manchester early on, this was the first time I’d laid eyes on these other finishers I’d just met. We mustn’t have been far from one another at any time over the last couple of days.
I made my rather damp way through the attractive town centre, passing the clock factory of J.B. Joyce, to the train station and the end of my little trip. 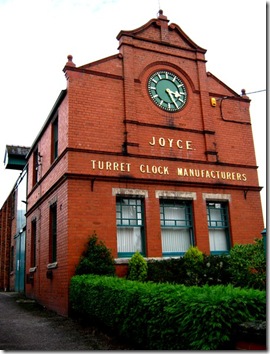 J.B. Joyce’s clock factory
Oh, the knee passed it’s test.
And the rain had stopped by the time I arrived at the railway station. 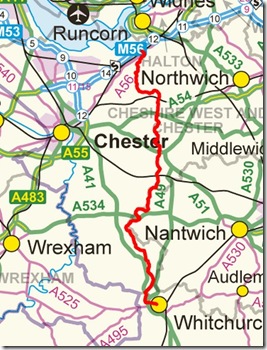 An unusually mild autumn day, 12degC and quite dry. Well it was dry at the start. In the Beginning I was really looking forward to thi... 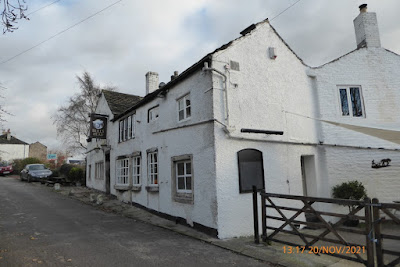