This is the Club’s 150th year, but with Covid, nothing has (yet?) been done in the way of organising appropriate celebrations. The Hartley Folly would have to suffice.

Various routes were considered and all were recced, eventually, and with the (mostly) polite advice of some members, a 14 mile main route from Edale to New Mills Golf Club was settled on. A shorter, 7 miles from Chinley, route was planned for walkers and those who might struggle with the longer distance.

The routes were planned with public transport in mind, Edale, Chinley and New Mills were all on the same railway line, it was just a matter of driving to New Mills Golf Club, running (downhill!) to New Mills Central, and hopping on to the train to the chosen start point.

Our normal trails are marked with clumps of sawdust. On the morning of a run, one or two members (the hares) will lay a sawdust trail over an 8-ish mile cross country route. runners (the hounds) will then attempt to follow the trail – some more successfully than others.

The Hartley Folly is slightly different in that sawdust is generally not used, the hares rely on a route description …. although I put a few clumps of sawdust down where I felt there was potential for confusion.

Given the average age of our club runners, confusion goes with the territory.

On the day we were joined by guest runners, including members of New Mills Jolly Joggers – a really lovely bunch. 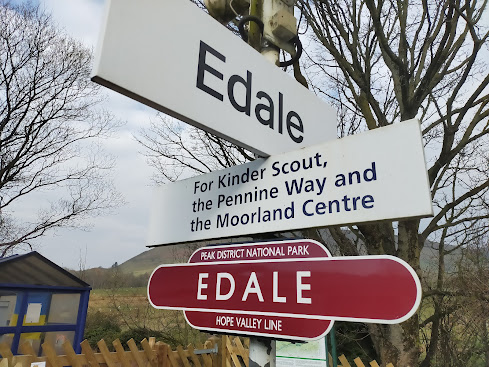 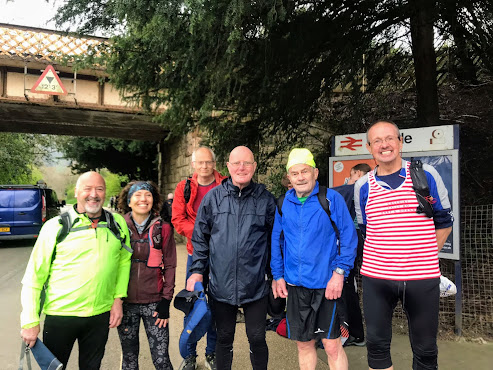 I was on the 10.17am train from NM Central, along with other runners. Some alighted at Chinley to take the shorter route, others at Edale. Les R travelled on the 1.16pm train, choosing to run the shorter route from Chinley.

Des W took an earlier train but arrived too early for refreshments at the tea stop at Peep o’ Day….Tally-Ho! is a very civilised trail running club!

Another group of runners took the 11.17am train, they varied the early part of their route by running up Grindsbrook onto Kinder Scout. They joined the main route before the tea stop – thus ensuring a rest & refuel break.

Our choice was the main route which started from Edale railway station, north to the Nags Head, then west along the Pennine Way, by Upper booth, to pass Lee Barn.

We were fortunate weather-wise, it was dry but chilly, thanks to a biting easterly wind - at least the wind was mostly behind us. 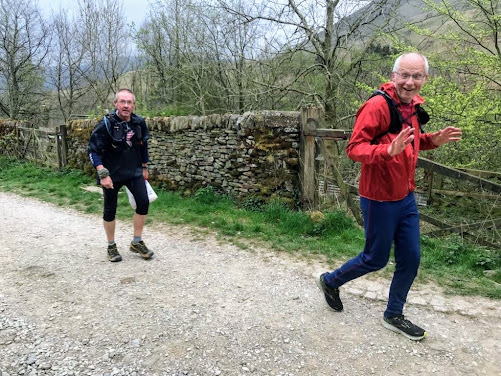 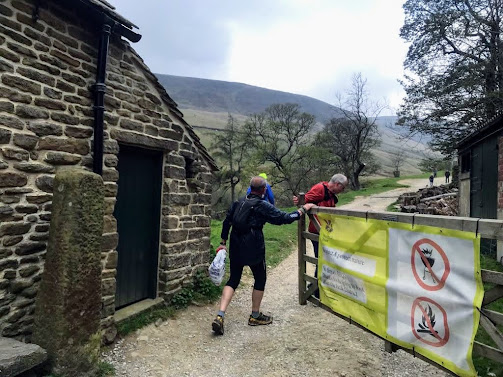 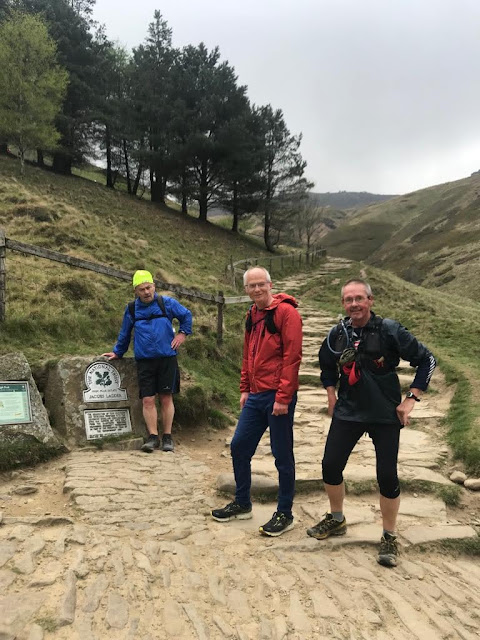 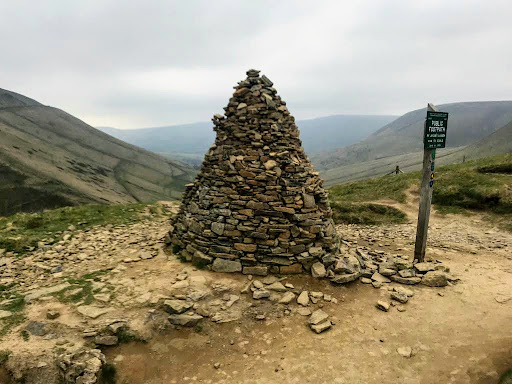 We climbed (trotted?) up Jacob’s Ladder, it was here that we felt the full effect of our very own Beast From The East – thank heavens for Pertex! 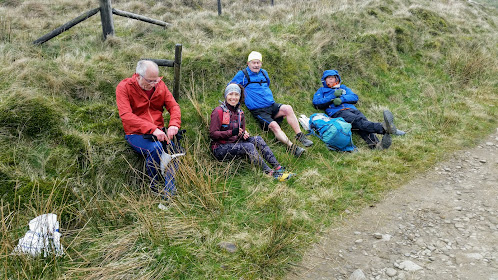 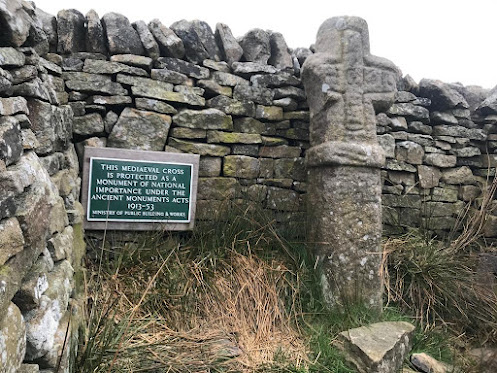 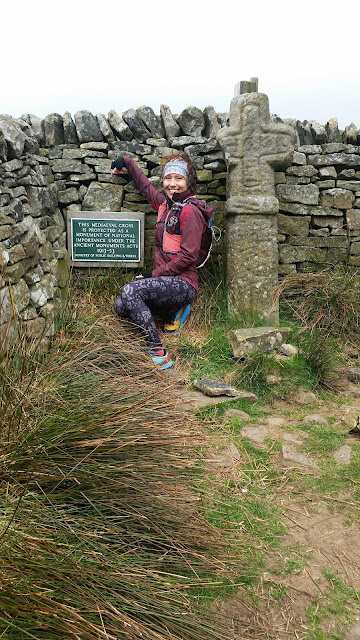 The route levelled out (a bit), where the Pennine Way turned to head north Swine’s Back, we continued west to pass the easily missed Edale Cross. Then it was downhill by Oaken Clough and Coldwell Clough and soon joined a section of the Pennine Bridleway which delivered us part way to the Tea Stop at Peep o’ Day – but not before a stiff pull up the northern flank of Mount Famine.

The PBW went north, we went west, in search of tea, cakes, and other eatables and drinkables. 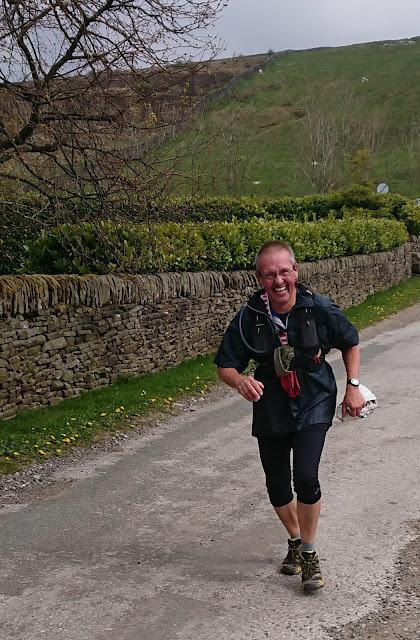 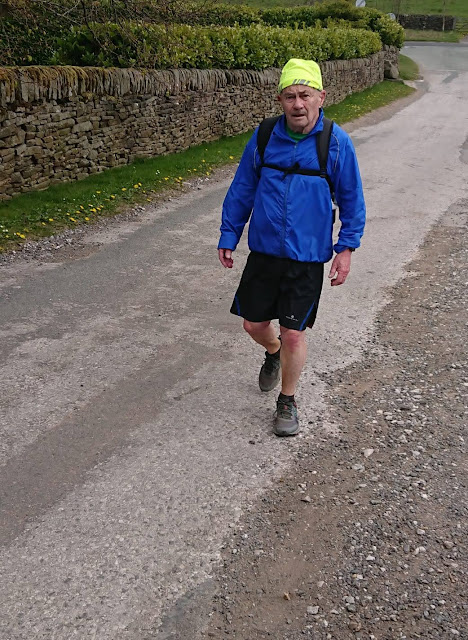 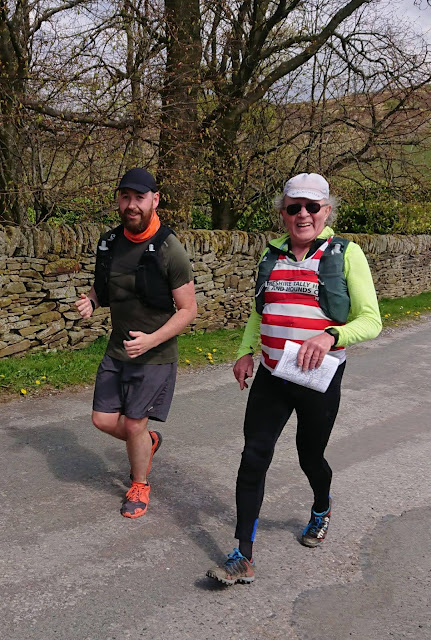 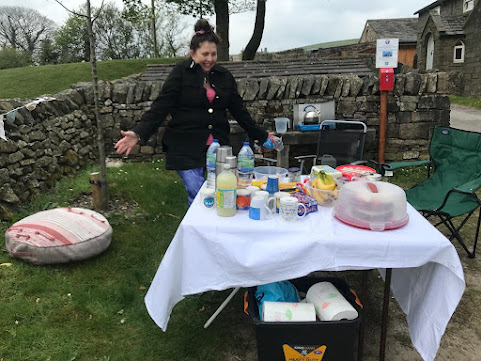 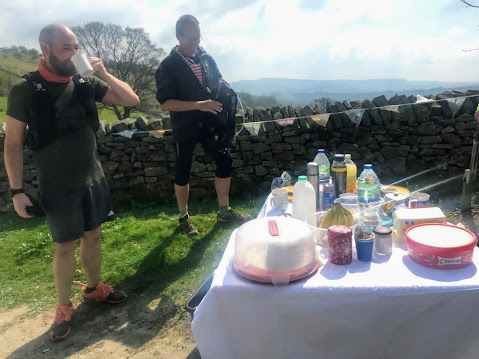 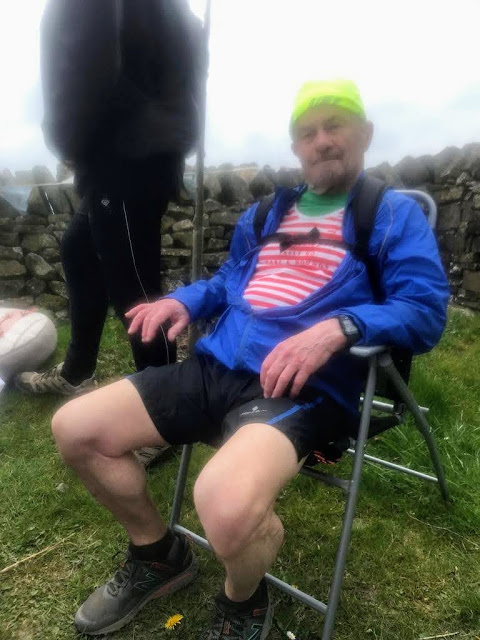 We arrived at the Tea Stop to find Ian B already there, he’d decided to walk the entire original route that started in Hope…what a hero he is!

The Tea Stop was quite excellent! Tea, coffee, cordial, water, plenty seriously yummy things to eat – even Jelly Babies! Joules did us proud, making sure everyone had everything the needed.

I ate too much, I’m a sucker for a nice spread – not a good thing when there’s another 6-7 miles to go! 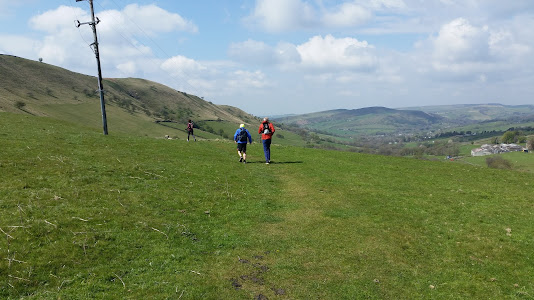 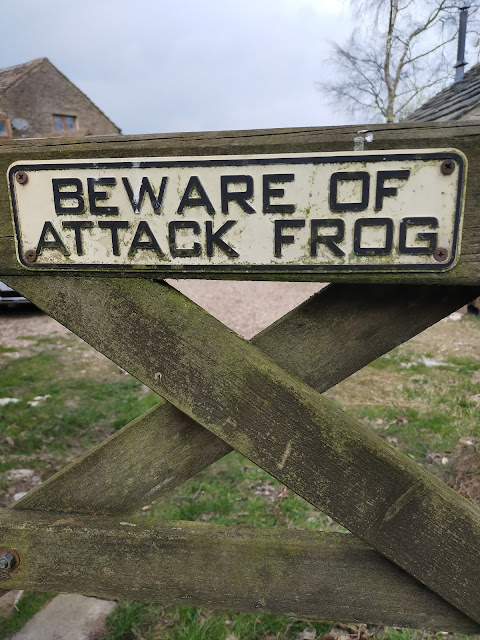 Leaving the Tea Stop we trotted north by Far Phoside then east to cross Chapel Road. It was the slightly uphill by Stubbs Farm, followed by a descent to rejoin the Pennine Bridleway just 200m north of where we’d previously left it. 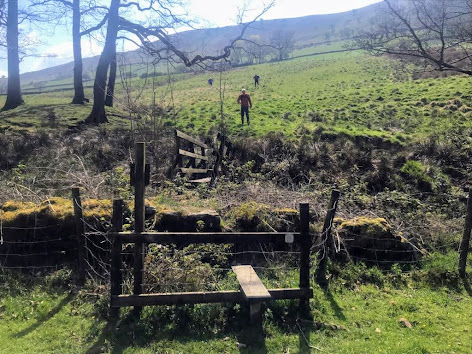 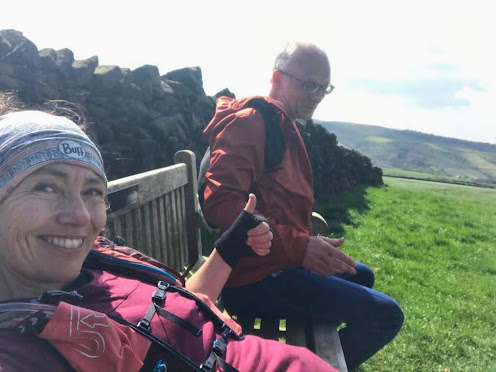 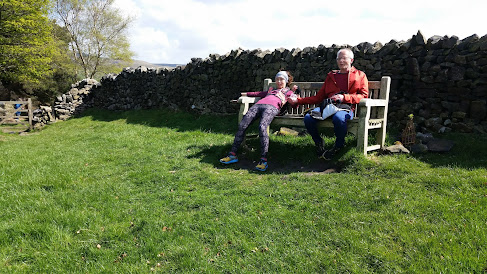 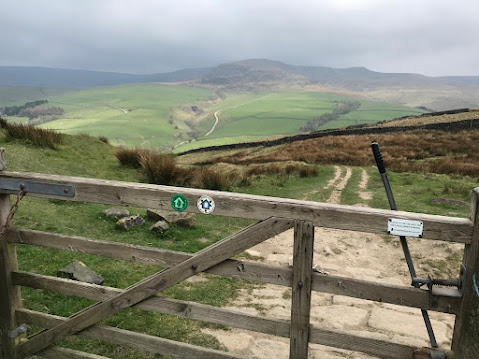 Almost doubling back on ourselves we turned westwards, further descending to follow the course of the River Kinder – a river with an identity crisis.

Noting Hayfield’s Sportsman Inn, famous for being exactly when needed towards the end of a particularly tough trail run a couple of months ago, we carried on into the village of Hayfield, and then onto the Sett Valley Trail. 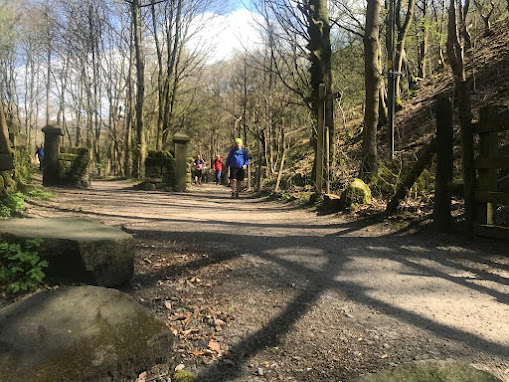 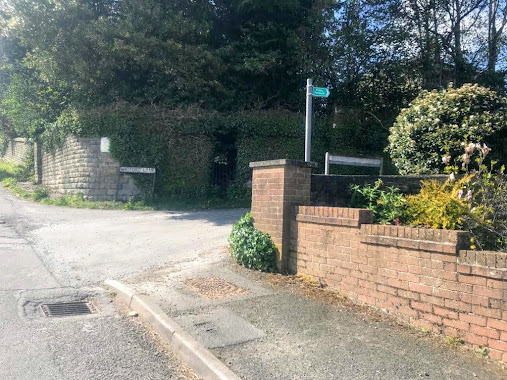 Easy running on the flat to the outskirts of New Mills, then leaving the Sett Valley Trail, uphill via a few zig-zags on tarmac and farmland by Tanpits Farm, the hamlet of Whitle, and finally the Golf Club hove into view.

Our route was about 14 miles with 2500’ of ascent, all runnable….with care in some parts!

Showered, changed, and rehydrated, 46 sat down to an excellent 3 course dinner.

After our dinner Hon Pres Park got to his feet to address the throng, and he presented a bouquet of flowers to Joules in recognition and thanks for her considerable efforts at the Tea Stop. 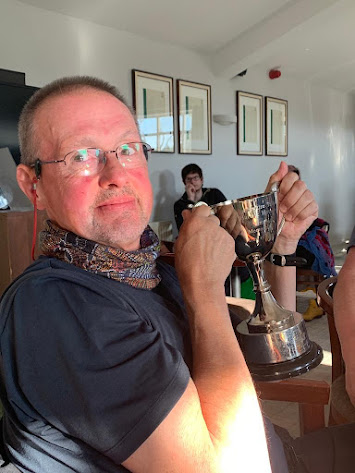 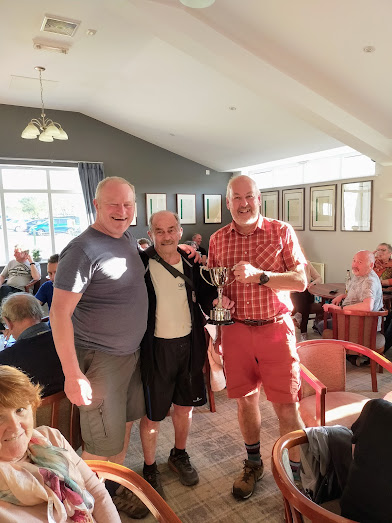 The dining room slowly emptied as the runners, walkers and their guests got up to head for home at the end of what had been, for me, a perfect day.

A trio of itinerant musicians struck up some tunes, their efforts seemed speed the emptying of the dining room. I can’t think why….they were very good.

My thanks to everyone for helping me plan, helping me on the day, and by taking part, making the day such a success.

It would be remiss of me not to offer the club’s thanks to Kirsty and her staff at New Mills Golf Club, they looked after us superbly! 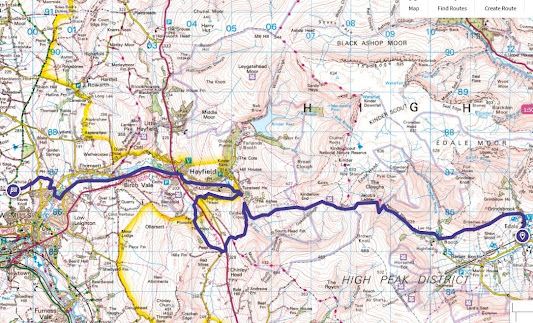 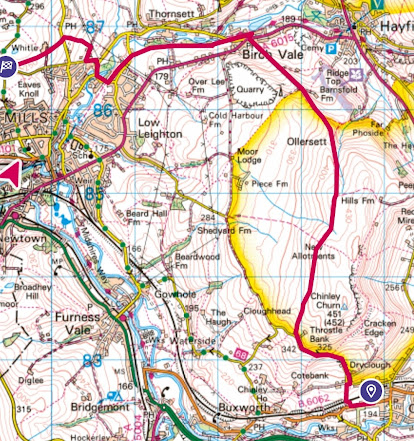 Thanks to everyone who sent me their photos, if there any more please send them to me and I’ll add them to the album.