The Plan, for there should always be A Plan, was to walk from the Ardnamurchan peninsula on the West coast of Scotland, to Scurdie Ness Lighthouse on the East coast.

The reasons for choosing this start point were two fold:

I had ‘discovered’ Kilchoan in both 1973 & 1974 when I attended the Loch Lomond Motorcycle Club’s Antler Rally. The ride, from Manchester was a tough one – especially on a 250cc MZ motorcycle, comfortable as they are. In those days Kilchoan’s electricity was supplied by generator and when the generator went off at night the whole place was plunged into darkness. I recall the petrol station dispensed fuel by hand-operated pumps. Anyroadup, I was keen to revisit the place just to see how it had changed over 45 years.

T’other reason was that I really needed a quiet start, and given that Kilchoan isn’t the easiest place to get to I imagined very few Challengers would be using it as a start point.

…by train, to meet up with Denis & Mary. Even three days before the event there were Challengers waiting to board the train at glasgow Queen Street. My destination was a poky and rather overpriced hotel in Oban. Oh well. 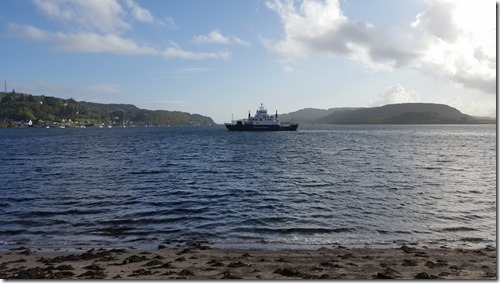 View from the hotel in Oban

Oban’s a lovely place and it was good (and important) to spend a bit of chilling / unwinding time there before the start of the Challenge.

Denis & Mary are good company and aren’t exactly unknown in Challenge circles. Other Challengers rolled up over the next couple of days – notably Chrissie Dixie. Food, beer and coffee were all consumed only to slight excess thanks to the excellent Wetherspoons by the harbour.

A bit of relaxing wandering around the town: 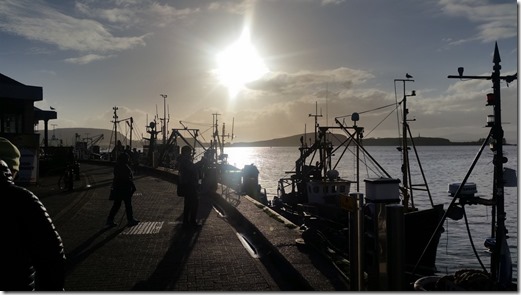 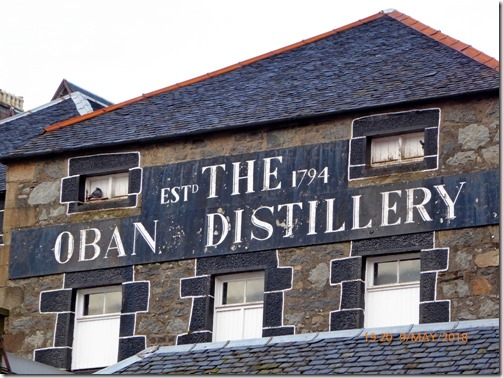 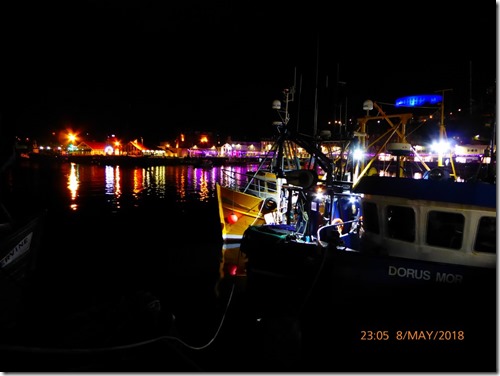 Oban Harbour.Wetherspoons had run out of Adnam’s so I left.

…by sea and bus. I met with The Kilted Pieman at the CalMac ferry terminal in good time for the sailing to Craignure on Mull. A bus deposited us nicely in Tobermory where we didn’t go for a pint. Until later. 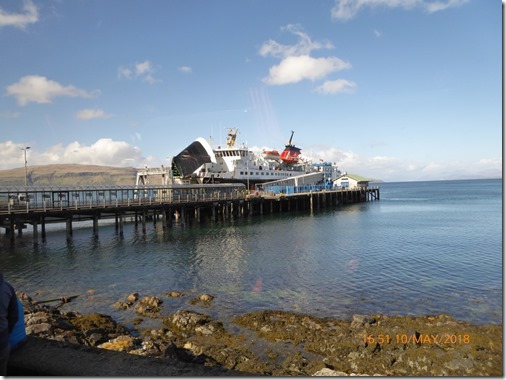 I was staying in the SYHA whilst Mike treated himself to a night in a hotel. 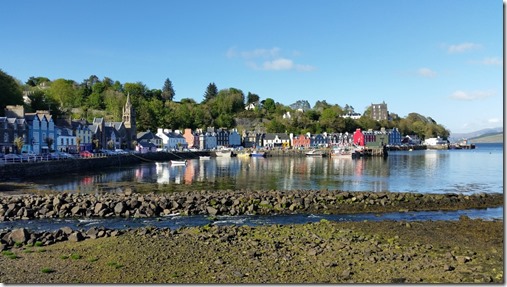 Tobermory in the sun

We met up for a bit of a very nice walk after tea. Apres-walk rehydration followed. 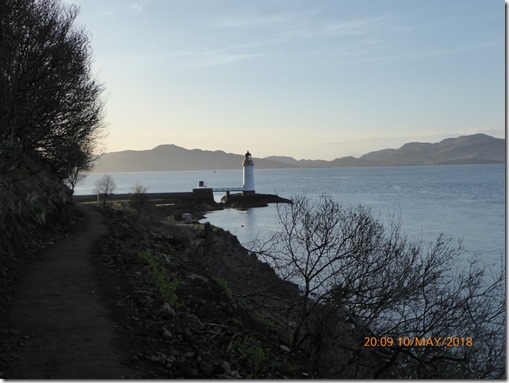 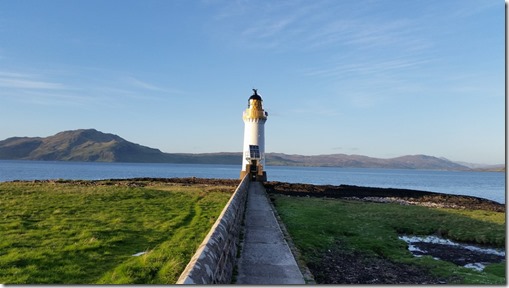 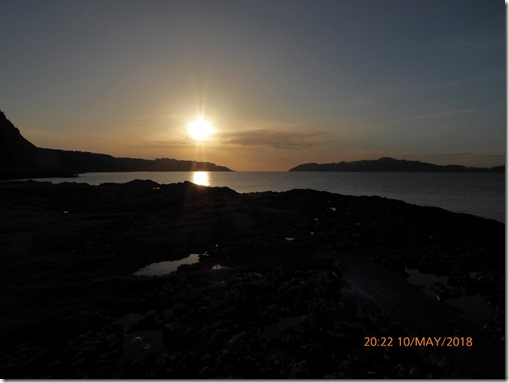 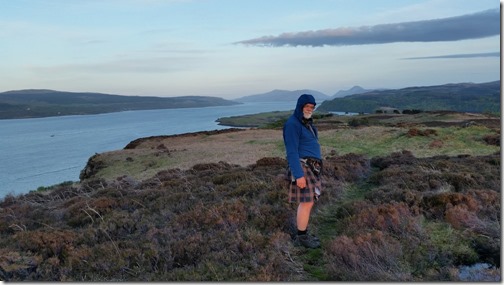 …by sea. The Plan was to catch the late Friday morning sailing to Kilchoan but the strengthening winds meant there was a good chance that that sailing would be cancelled – so it had to be the early sailing or nothing. 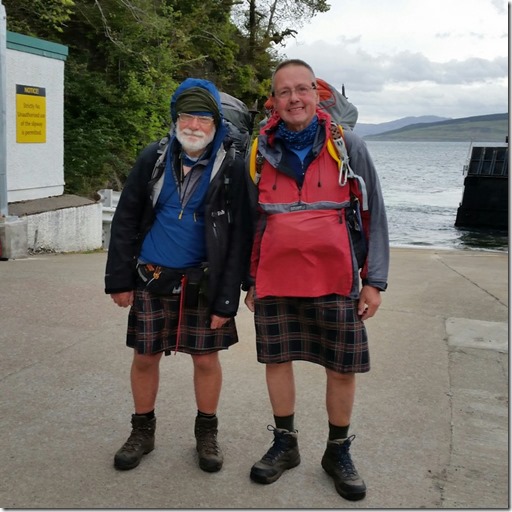 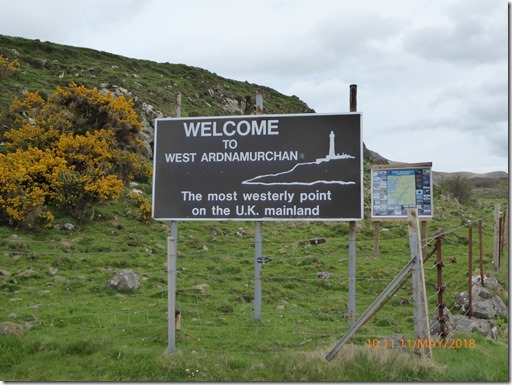 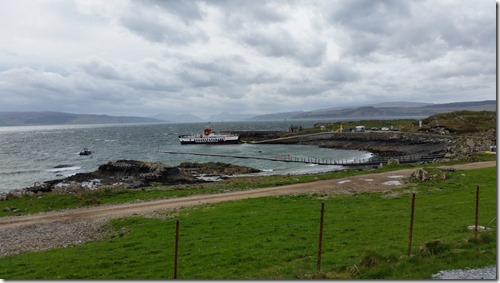 A bumpy ferry crossing over the sea deposited us in Kilchoan in good time to have missed most of the other Challenge starters. I was sorry to miss Neal from Shetland who had proved such great company on last year’s Challenge. 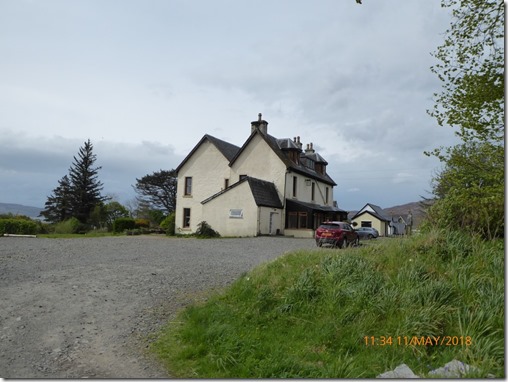 The Kilchoan Hotel, our sign-out point, had changed somewhat over the years. In 1974 it was a basic ‘proper’ pub. Now it was all fancy menus, heated toilets and coffee from a cafetiere. Not quite the same.

A cafetiere of not-very-good coffee set us up for our individual Challenges and after signing out we headed off for two weeks of walking. 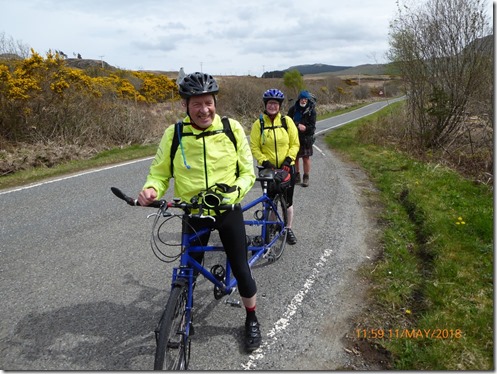 It wasn’t long before a couple on a rather nice tandem pulled up for a chat. The couple, Sandra and Jim Robb, were both Challenge Leg-Ends and justifiably proud of their record. Their last Challenge in 2004 (C25) was my FIRST Challenge.

Sandra & Jim headed off to the lighthouse at Ardnamurchan Point, whilst Mike headed East and I went North.

Then the wind got up my Sports Kilt and it started to rain. Rather a lot. My PacLight overtrousers were needed, they worked well over my Sports Kilt. So far my route was on single-track roads, nice and quiet but a bit exposed to the elements. 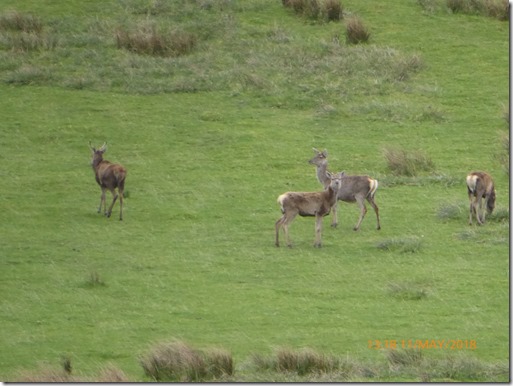 First deer of the trip 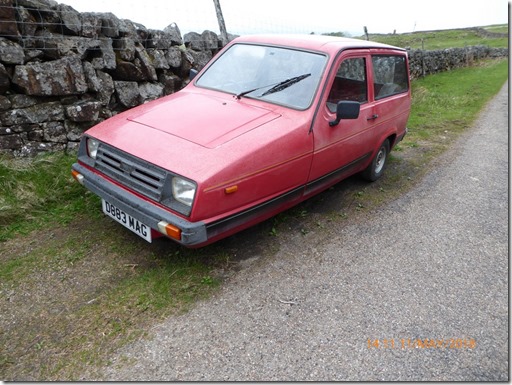 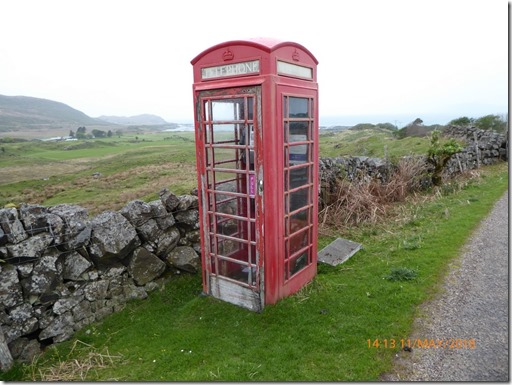 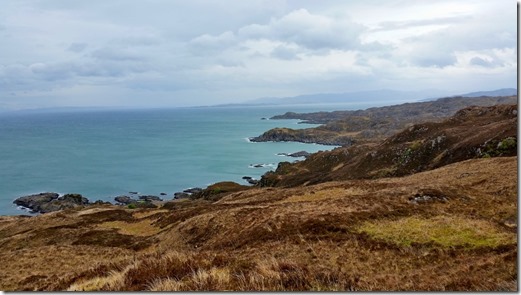 The north coast of Ardnamurchan is quite wild and beautiful. I started to get a move-on, not wanting to be out in the bad weather for too long. 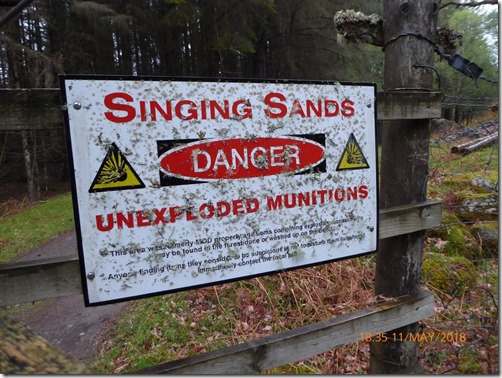 I was looking foward to getting my tent up by Singing Sands but the signage had a slight deterrent effect….so I carried on eastwards.

And then I carried on some more because there was nowhere to camp, the ground was either too sodden, too rough or too ‘public’.

It was 9pm when I arrived in Acharacle, miles beyond my intended camp-spot, I struggled to find a sufficiently out-of-the-way spot to pitch my tent but I’d spotted a fall-back opportunity on the map: a church yard. Added advantage of such a camp spot is that they often have an outside water tap….but this was the West of Scotland where rainfall is plentiful, a water supply isn’t really needed in this area! Oh well, I didn’t want a drink / meal / wash anyway. Well not much.

My chosen spot was flat, very private, and offered plenty of early morning sunshine to dry off my Akto. And there were red squirrels. Nice.

I slept well that night.

But before that, a few more piccies. The first lot are for Rob who has a thing about doors (I don’t ask): 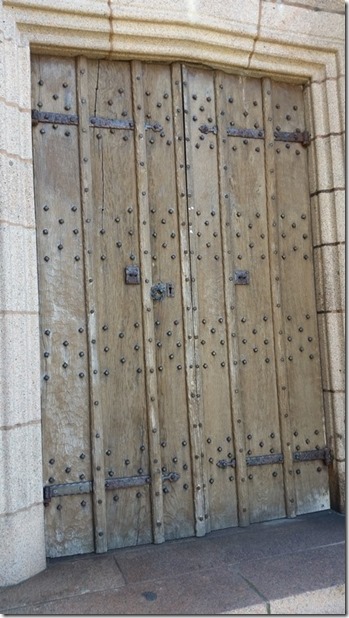 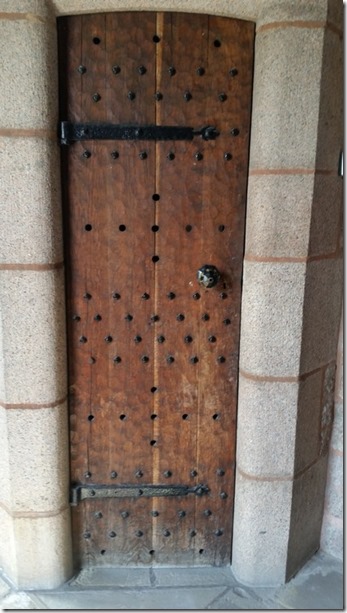 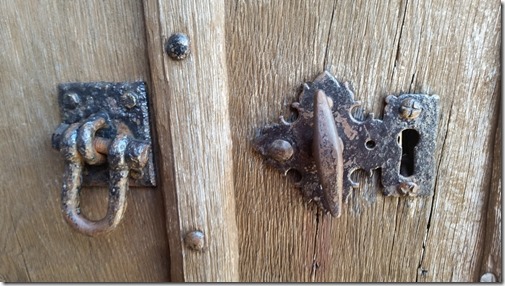 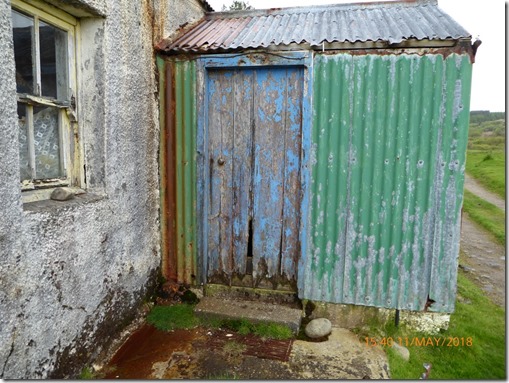 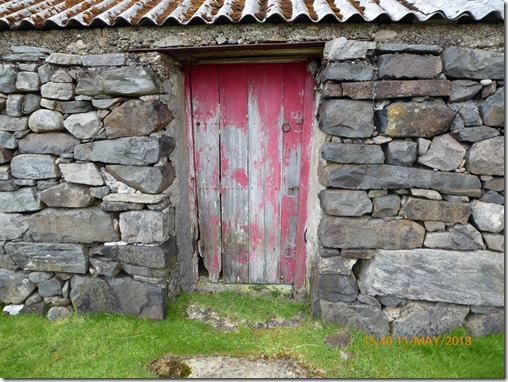 And these are for AlanR….of course: 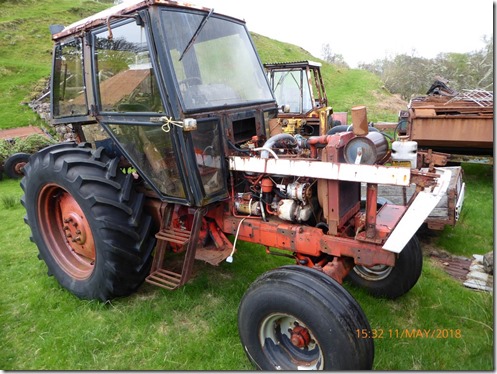 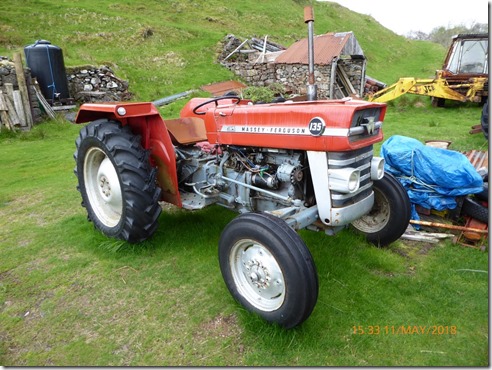 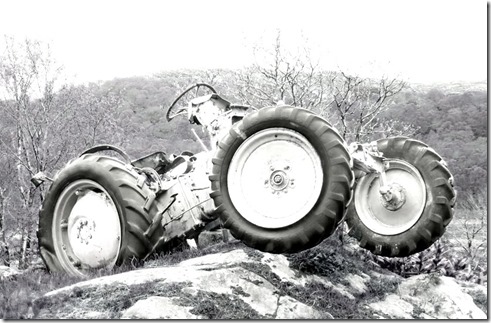 All my photographs from this trip can be viewed here.